• The former Chadian prime minister, who ran unopposed, received support from 51 of 55 member states in the secret ballot, according to Al Jazeera.

• Meanwhile, DRC President Félix Tshisekedi Tshilombo was named as the 19th African Union chairperson for a one year-term. 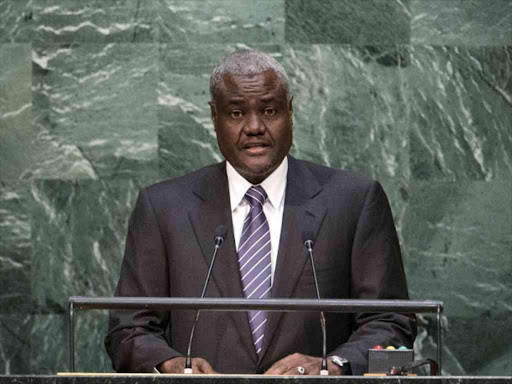 Moussa Faki was on Saturday re-elected for a second term as the head of the African Union Commission at the opening of a two-day virtual summit.

The former Chadian prime minister, who ran unopposed, received support from 51 of 55 member states in the secret ballot, according to Al Jazeera.

Meanwhile, DRC President Félix Tshisekedi Tshilombo was named as the 19th African Union chairperson for a one year-term.

Tshisekedi took over from outgoing South African President Cyril Ramaphosa whose term came to an end on February 6, 2021.

Ramaphosa took over on February 10, 2020, and has been at the forefront with other union’s leadership in the war against coronavirus.

The changes were announced on Saturday during the 34th Ordinary Session of the Assembly of the African Union, which was held virtually.

In his remarks, Ramaphosa said that Covid-19 has demonstrated the value of the African Union.

“It’s through its structures that we’ve been able to drive a collective response to the crisis, marshaling resources for the benefit of all and striving to ensure that no country is left behind,” Ramaphosa said.

Ramaphosa added that even as the continent fights the virus, the union brought into existence the African Continental Free Trade Area.

President Uhuru Kenyatta thanked Ramaphosa for steering the continental organisation during the unprecedented period of the Covid-19 pandemic.

“You have ably shepherded our continent to respond to the pandemic in a timely and effective manner,” Uhuru said.

He also congratulated president Tshisekedi for taking over the chairmanship of AU, assuring him of Kenya’s full support.

“My delegation expresses full confidence in your solid leadership and ability to take our Union to greater heights.”

African Union Commission (AUC) chairperson Moussa Faki Mahamat used the session to express to all the African states and leaders his grateful thanks for the support and care.

“It is a unique experience that I have lived alongside you and which has strengthened my determination to make the African Union, with your support, the instrument par excellence of integration, peace, and development of the Continent,” Faki said.

He also paid his special tribute to all the heads of state, champions of their respective themes for the valuable contributions they have made.