• Kenyan health officials in Busia and Malaba border towns are on high alert following an Ebola outbreak in neighbouring Uganda.

• The infections in Uganda confirmed that the deadly outbreak has spread for the first time beyond the Democratic Republic of Congo. 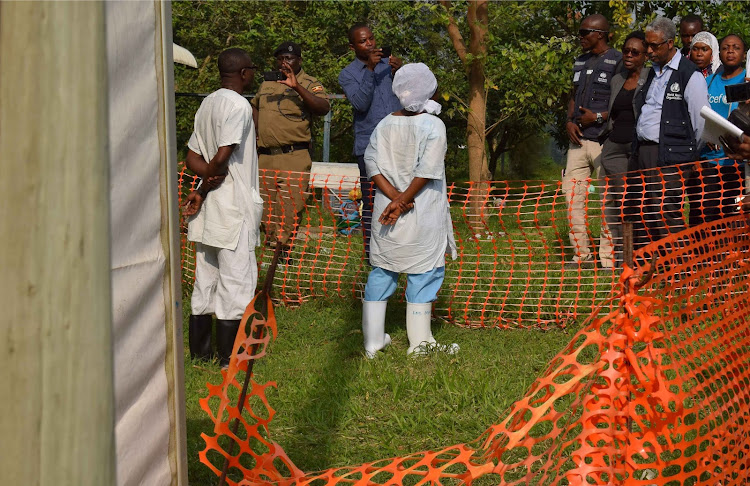 World Health Organization (WHO) officials talk to Ugandan medical staff as they inspect ebola preparedness facilities at the Bwera general hospital near the border with the Democratic Republic of Congo in Bwera, Uganda, June 12, 2019.
Image: REUTERS

A Congolese woman has become the second patient in Uganda to die of the deadly Ebola virus in the latest outbreak of the disease, a health ministry official said on Thursday.

The woman was the grandmother of a five-year-old boy who died on Tuesday evening after crossing into Uganda with his family from the Democratic Republic of Congo.

Ainebyona said two other patients remained in isolation - the three-year-old brother of the dead boy and a 23-year-old Ugandan man who has manifested Ebola symptoms.

Kenya on high alert after Ebola outbreak in Uganda

Test results for the 23-year old are expected later on Thursday, he said, adding that a total of 27 contacts are now being monitored.

The current Ebola epidemic began in August last year in eastern Congo and has already infected at least 2,062 people, killing 1,390 of them.

The infections in Uganda confirmed that the deadly outbreak has spread for the first time beyond the Democratic Republic of Congo.

WHO confirms a case of Ebola in Uganda

Almost 1,400 people have died of Ebola in DRC since August.
News
1 year ago

The exercise is coordinated by the East African Community and supported by several partners, including WHO
News
1 year ago
by REUTERS Reuters
Africa
13 June 2019 - 11:09