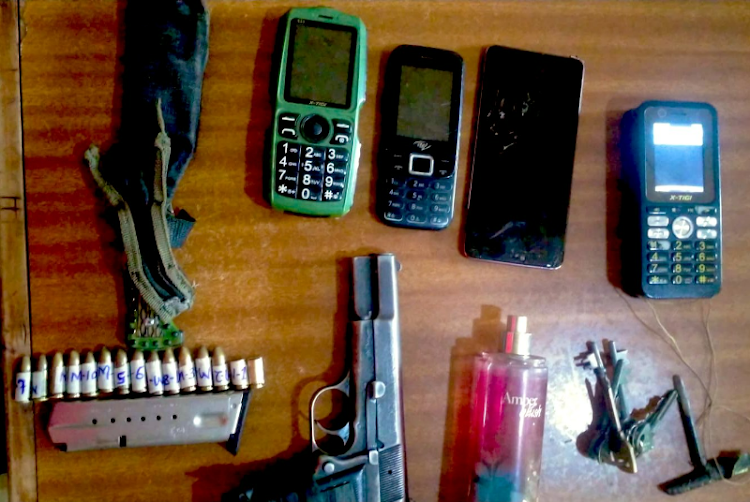 A pistol and an assortment of items recovered from the suspects.
Image: DCI

Four suspected thugs were on Wednesday morning shot and killed in separate incidents of a new war on armed crime in Nairobi.

Police said they recovered three pistols with ten bullets from the slain men.

The police argue the weapons have been used in committing crimes in the city and that ballistic tests will tell more.

A notorious gangster who has been terrorising residents of Dandora was gunned down by police on Wednesday.

The suspect and his accomplices were attacking and robbing pedestrians. The other accomplices managed to escape.

The second shooting incident happened in Shauri Moyo area where two suspects were mowed down by police bullets in a botched robbery.

Police said the two were part of a gang that had been attacking and robbing pedestrians at about 5 am when an alarm was raised.

The alarm alerted police who were on patrol.

Nairobi Regional Police Commander Adamson Bungei said the officers rushed to the rescue of a female pedestrian who was under attack and felled two suspects after they refused to surrender as ordered.

A browning pistol was found on the two.

A fourth suspect was killed in Kasarani area where he and his accomplices who managed to escape had allegedly been attacking pedestrians.

Bungei said the officers recovered a pistol from the slain suspect.

He said the recovery of the three pistols is remarkable and will address many unsolved crimes.

“Most of the victims are all young men who had armed themselves illegally to terrorise innocent Kenyans,” he said.

The bodies were moved to the mortuary pending autopsy.

Bungei said police are determined to address the menace of armed robberies in the city.

Police in Kisumu investigate pelting of train with stones

The train was stoned while in transit to Kisumu Railways Station from Nairobi.
News
1 month ago

The suspect is in custody and will be detained for five days pending investigations.
News
1 month ago
Post a comment
WATCH: The latest videos from the Star
by CYRUS OMBATI Chief Crime Reporter
News
25 January 2023 - 09:24
Read The E-Paper