Says regional leaders still see his value, "why shouldn't we?"

• Uhuru is the chairman of the Azimio coalition and has still maintained his party leader status in the former ruling party, Jubilee.

• The law says a retired president shall not hold office in any political party for more than six months after ceasing to hold office as President. 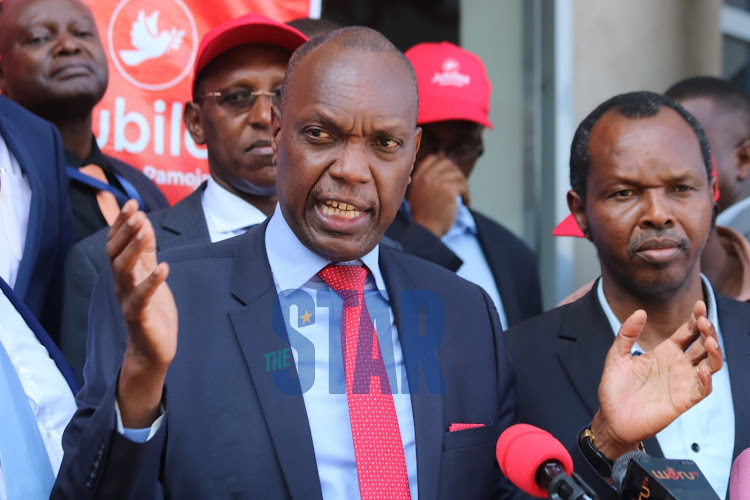 In an interview with Kenyans.co.ke, Kioni said the former head of state is still actively involved in party issues until such a time he says otherwise.

"If I had said that I was coming for this interview at 10 and I have not called to say I have cancelled, you expect me to come. The former head of state has not changed his status," Kioni said.

The former Ndaragwa MP said the retired president is still in charge of the institutions he has been mandated to head including his role as the AU-EAC Facilitator of the Nairobi peace process in DRC.

Uhuru is the chairman of the Azimio coalition and has still maintained his party leader status in the former ruling party, Jubilee.

When asked if he will consider stepping down from the political offices to enjoy the retirement parks that come with his status as retired president, Kioni said Kenyans should not hurry Uhuru into retirement.

"He has not communicated to us anything to the contrary so he continues that way until he himself does it," he said.

The former lawmaker said retirement packages for retired heads of state are a way of a country saying "thank you for serving us".

"But the situation we are in (DRC conflict), he is required by the regional leadership. If they are seeing value in him now, why would we as Kenyans want to hurry him into retirement?" Kioni posed.

On retirement, the President is entitled to a one-off gratuity of Sh34.6 million and a lifetime pension of Sh1.2 million every month.

Section Six of the Presidential Retirement Benefits Act 2003 says a retired president shall not hold office in any political party for more than six months after ceasing to hold office as President.

It states that a president should instead be expected to play a consultative and advisory role to the government and the people of Kenya.

The Act cites two grounds on which a retired president may be denied his retirement perks.

When the former president is convicted of an offence and sentenced to imprisonment for a term of three years or more, without the option of a fine; or holds office in, or actively engaged in the activities of any political party.

“The National Assembly may, on a motion supported by the votes of not less than two-thirds of the members thereof, resolve that a retired president or his surviving spouse, as the case may be, shall not be entitled to the whole or any part of the benefits conferred by this Act,” the law reads.

Otherwise, if at least 233 MPs resolve that he shall not be entitled to part or whole of the benefits, he will walk away empty-handed after ten years of service to the country as president.

Uhuru to quit as Azimio chair or lose fat perks

How ex-president Uhuru is spending his retirement days

He was spotted walking within the premises of Zebu Hotel in Narok
News
3 months ago
Post a comment
WATCH: The latest videos from the Star
by EMMANUEL WANJALA Radio, Print & Digital Reporter
News
25 January 2023 - 16:50
Read The E-Paper