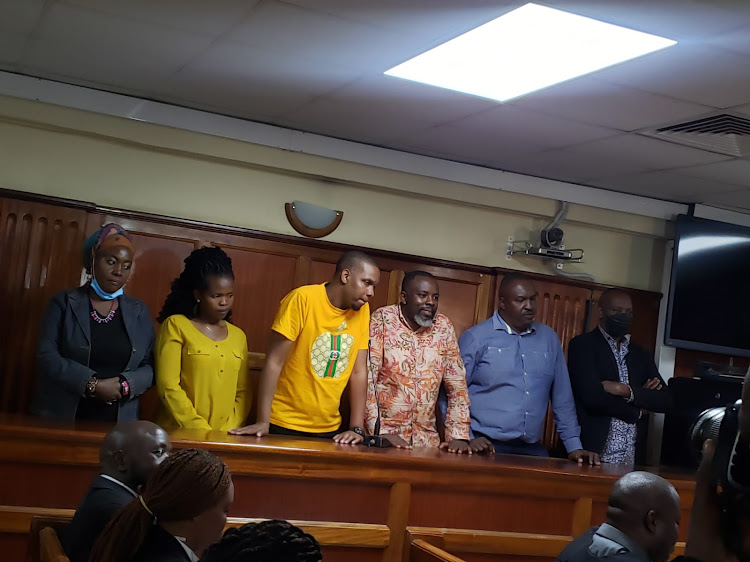 Bar proprietor and his five employees were charged with the murder of former Juja MP George Thuo 10 years ago and have a case to answer.

Justice Roselyn Korir on Wednesday ruled that the accused persons were found culpable and put on their defence.

The judge noted that she had considered the prosecution case on witnesses evidence and exhibits produced in court.

"After analysing the evidence, I have found that the prosecution has established a prima facie case against the accused persons to warrant this court to place them on their defence ", the judge ruled.

Defence lawyer Cliff Ombeta said his clients will give sworn evidence in their defence.

The prosecution called 30 witnesses to testify in the case. The case will come up on February 14 for defence hearing.

Last year, Paul Wainaina Boiyo asked the court to acquit him for lack of evidence.

Through his lawyer John Khaminwa, Boiyo and others said the Director of Public Prosecutions had failed to establish that the accused had the motive to poison Thuo.

In his final submissions, Khaminwa said Thuo was a regular and respected customer at the club.

“No motive to poison him has been established by the DPP. No evidence to demonstrate the link between the accused and the death of the deceased,” said Khaminwa.

The advocate said that before Thuo went to Porkies Club, he had been drinking alcohol elsewhere.

“Indeed there were bottles of beer in his car.”

In addition, Khaminwa submitted that the former MP had a heart problem and “was receiving treatment from time to time”.

The court was asked to take judicial notice that specimens from the body, the glass he used and the beer bottle were taken to South Africa for forensic examination.

“The evidence from South Africa has never been produced in court and thus the case is incurable,” Khaminwa submitted.

During the hearing, Chief Inspector Maxwell Otieno, the lead investigator, told Justice Korir that the Tusker beer bottle from which Thuo was drinking and the clothes he was wearing were taken to the Government Chemist and the test results indicated that the former legislator had been poisoned.

According to the police officer, a post-mortem showed that he had died due to excessive bleeding.

Otieno said the accused’s interview statements indicated a possibility that they took part in the poisoning of Thuo, who was served three bottles of beer at the bar.

Dr Andrew Gachii, a consultant pathologist and forensic specialist who participated in the joint post-mortem on behalf of the family, told the court that Thuo died from hemorrhagic gastroenteritis caused by poisoning

Time and chance brought Ruto and I together — Nelson Havi

Says before joining UDA on November 12, 2021, he had made inroads to ODM the preceding two weeks
Siasa
7 months ago

The nomination was conducted by Stat Media News.
News
3 days ago
Post a comment
WATCH: The latest videos from the Star
by CAROLYNE KUBWA Court Reporter
News
25 January 2023 - 16:08
Read The E-Paper