Why do my feet smell? And what can I do about it?

Some people's feet are so pungent they could almost knock you out.

• Feet can become sweaty in hot weather, especially if we wear a closed-in shoe or boot and the sweat doesn’t evaporate.

• Sweaty feet are common, but some people have an excessive sweating condition called “hyperhidrosis”. 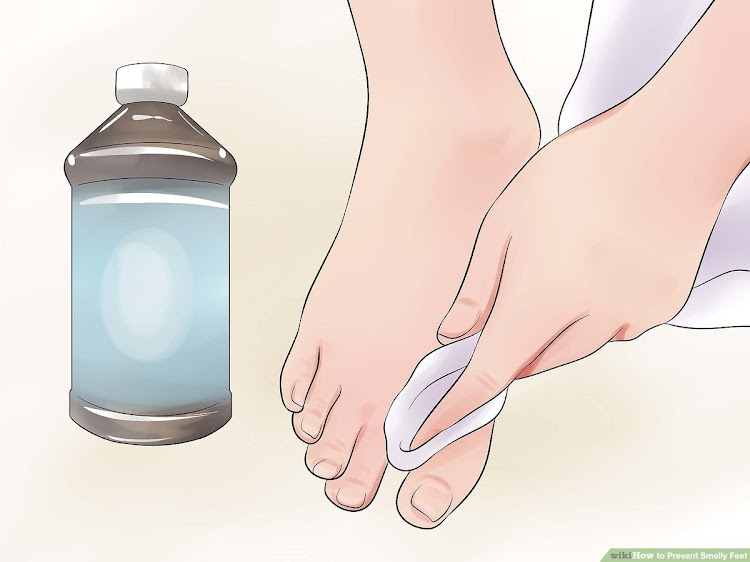 An illustration of a person wiping the toe.
Image: Healthline

“Smelly” might be the first word that comes to mind when you think of feet.

Why do some people’s feet have no smell, yet other feet are so pungent they could almost knock you out?

Let’s go through what causes smelly feet, what you can do about it, and when to seek professional advice.

Feet can become sweaty in hot weather, especially if we wear a closed-in shoe or boot and the sweat doesn’t evaporate.

Anxiety and emotional stress also increase the activity of sweat glands due to the release of stress hormones such as adrenaline, causing sweaty hands and feet.

Sweaty feet are common, but some people have an excessive sweating condition called “hyperhidrosis”. It’s very distressing and can lead to social awkwardness, reduced self-confidence and poor mental health.

But sweat usually doesn’t have a smell by itself. It’s the bacteria that feast on sweat that cause the bad smell.

Foot odour is associated with several types of bacteria. When these bacteria eat the sugars and fats in sweat, they produce chemicals with a noxious smell.

The most common chemical compounds are:

A type of bacteria called “brevibacteria” also cause foot odour. They eat dead skin on our feet, producing a gas which has a distinctive sour smell.

Cheesemakers will often add this bacteria to the surface of cheese to develop texture and flavour. This explains why many cheeses smell like feet, and feet smell like cheese!

Biologist Bart Knols received an “Ig Nobel” Prize (for unusual scientific achivements) in 2006 for demonstrating that a type of mosquito known for transmitting malaria has an equal preference for Limburger cheese and the smell of human feet.

What else can cause smelly feet?

A bacterial skin infection called “pitted keratolysis” may also cause bad foot odour. It typically affects the soles of the feet and in between toes, and makes the skin white and soggy, often with clusters of small punched-out craters or “pits”. These pits are caused by bacteria digesting the skin and producing sulphur compounds.

It’s more common in men than women and is associated with sweaty feet, poor foot hygiene, diabetes and immunodeficiency. Pitted keratolysis will respond to treatment with antiseptic agents and topical antibiotics.

Foot odour can also be caused by tinea, a fungal skin infection often called athlete’s foot, which a podiatrist will be able to diagnose. It can be treated with an anti-fungal cream or lotion.

What you can do to manage sweaty and smelly feet

The first things to consider if you have smelly feet are foot hygiene and footwear.

Feet don’t wash themselves in the shower. In fact, bacteria from the rest of your body are washed down to your feet. So, it’s important to wash your feet with soap – including between your toes!

Drying your feet thoroughly after bathing is also important to prevent the build-up of sweat and bacteria.

It’s ideal to alternate your footwear so that shoes and boots have a chance to dry out before you wear them again. Damp footwear is the perfect place for bacteria to thrive and create those smelly chemicals.

Regular washing and drying of anything your wear on your feet will remove bacteria and stale sweat.

Bamboo has a natural antimicrobial effect (meaning it may have some ability to slow bacteria or mould growing), and socks made from this fibre may be helpful, but it’s unclear whether the benefits translate to bamboo clothing products.

There’s conflicting views on the best material for shoes and socks to improve smelly feet, so more research is needed.

Treatments for sweaty and smelly feet

If your feet are stubbornly sweaty and smelly even with good foot hygiene and attention to footwear, you may need to consider some other options.

An expert opinion from a podiatrist will help you make an appropriate treatment choice and ensure more serious issues aren’t missed.

Most of the available treatments for body odour target sweat production:

Caroline Robinson would like to thank Anna Horn from Charles Sturt podiatry, for her contribution to researching this article.

Tips on how to get rid of smelly feet

Accumulation of sweat and bacteria leads to bad odours.
Sasa
2 months ago

Causes and remedies for smelly feet

Smelly feet is usually caused by a build up of sweat over an enclosed area.
Sasa
11 months ago
Post a comment
WATCH: The latest videos from the Star
by CAROLINE ROBINSON
News
24 January 2023 - 17:19
Read The E-Paper