Cherera did not appear in person but was represented by lawyer Apollo Mboya. 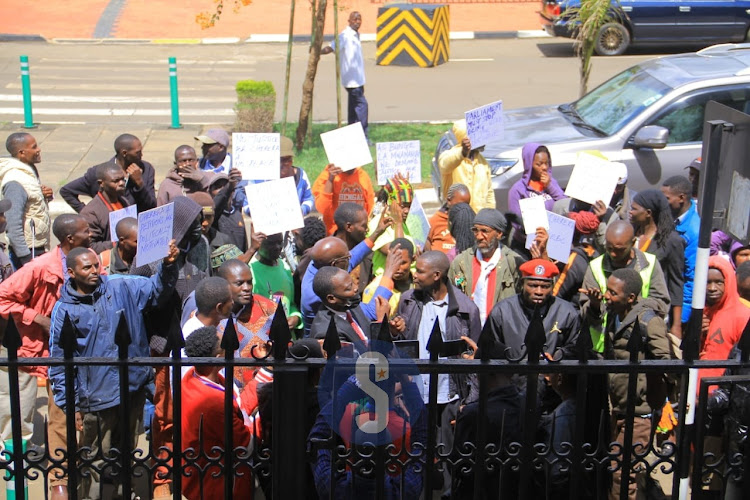 Protests outside parliament where proceedings of the petitions to remove 4 IEBC commisoners are on going on November.28th.2022
Image: EZEKIEL AMING'A

Demonstrators have marched to Parliament Buildings to protest against a move to oust four IEBC commissioners.

Cherera did not appear in person but was represented by lawyer Apollo Mboya.

“Kenyans are with Cherera and the three others. Even if they throw tear gas or fire live bullets at us, we will not stop,” Otieno stated.

Otieno further appealed to Nairobi residents to turn up in large numbers on Wednesday at Kamkunji Grounds for a rally in support of the four commissioners.

The protestors said they will also use the Kamjunji meeting to protest against the high cost of living and rising crime.

“Unga is still up, fuel is unaffordable and we are living in constant fear of being attacked by criminals,” added Okoth.

As the protests proceeded, Cherera through her lawyer was requesting 10 days to respond to petitioners.

Masit is scheduled to appear before the committee in the afternoon while Wanderi and Nyang’aya will defend themselves on Tuesday.

Last week, Cherera's legal team walked out in protest after the JLAC chairman George Gitonga ruled that the committee has jurisdiction to listen to both the petitioners and the Commissioners.

Azimio principals Raila Odinga and Kalonzo Musyoka who attended the last week's sitting had told the Commissioners not to honour the invitation to appear before the Committee.

Post a comment
WATCH: The latest videos from the Star
by ALLAN KISIA Political Writer
News
28 November 2022 - 12:18
Read The E-Paper