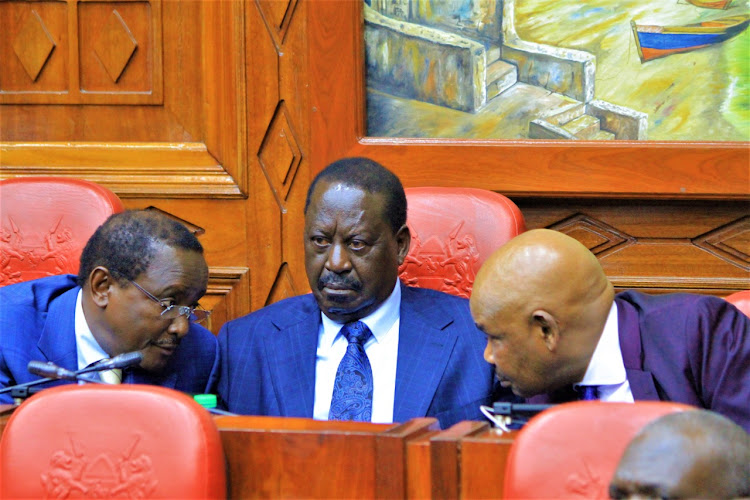 The crux of their fight revolves around Ruto’s plot to kick out four IEBC commissioners who rejected the August 9 presidential election results and Kenya Kwanza's scheme to raid the opposition.

However, it is the hotly contested election that lifted the lid on the renewed Raila- Ruto war.

Raila fired the first salvo on Thursday when he accused Ruto of taking the country back to the state of affairs last witnessed in the Nyayo regime of the 1980s.

“This kind of impunity, selective injustice and capture of institutions will have grave consequences,” Raila said in reference to the start of the process of removing the four IEBC commissioners.

Raila further accused the Kenya Kwanza administration of having proceeded on a path of impunity, witch hunt and revenge.

“Their target has been the institutions and individuals the regime thinks did not dance enough to its tunes during campaigns,” he said.

Barely a day after Raila issued the scathing statement, Ruto has fired back.

He said, “lords of impunity, who destroyed oversight institutions using the handshake fraud, should allow Parliament to hold rogue officials who put the nation in danger by subverting the democratic will of the people to account.”

The President added that the “new order is rule of law and wishes of big men.”

Raila had accused Ruto of training its guns on the four IEBC commissioners for having expressed reservations over the process that led to him being declared winner.

Azimio has also been accusing Ruto of 'poaching' its MPs to create an impression that he is more powerful.

Prime Cabinet secretary Musalia Mudavadi has been seen to be making a deliberate effort to snatch the Western region from Raila.

On Wednesday, MPs from the region met Mudavadi where they resolved to work together for the development of the region.

The MPs led by the Western Region MPs Caucus chairman Sirisia MP John Waluke expressed their commitment to the unity of the region.

The forthcoming by-election is also turning out to be battle field for Ruto and Raila.

Narok Senator Ledama Olekina has said Azimio has no option but to win the forthcoming Bungoma and Elgeyo Marakwet by-elections.

He has urged the coalition leader Raila Odinga to ensure the forthcoming campaigns are issue-based.

Moses Wetang’ula relinquished the Bungoma seat when he contested for the Speaker of National Assembly seat, which he won.

Kipchumba Murkomen resigned as Elgeyo Marakwet senator when he was appointed to the Cabinet.

Narc Kenya leader Martha Karua has also accused Ruto of scheming to have IEBC chairman Wafula Chebukati in office when the December 8 by-elections are held.

She has argued that Chebukati should be on terminal leave since his term comes to an end on January 17, 2023.

“He is insisting on the officials to be in office so that they can give him the results he wants,” Karua said.

The opposition chief will meet the coalition's 22 county chiefs.
News
1 week ago

The leaders resolved to work together for the development of the region.
News
1 week ago