Bandits, cattle rustlers should be classified as terrorists - IG Koome

Says bandits and cattle rustlers are responsible for mass loss of lives.

• The IG further warned criminal elements around the country that they will no longer have a field day.

• He said acts of lawlessness will not happen under his watch saying he won't sleep on the job as petty criminals go about terrorising Kenyans. 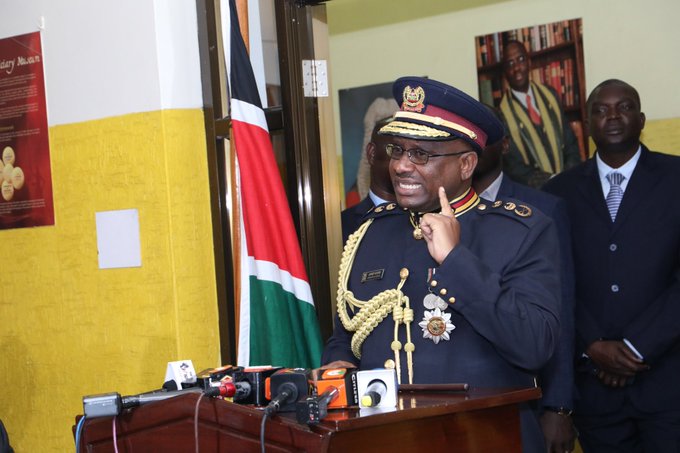 Inspector General of Police Japeth Koome has said he will engage Parliament to have banditry and cattle rustling classified as terrorist acts.

In his inaugural speech shortly after being sworn in on Friday, Koome said the two criminal activities have led to massive casualties.

"Those stealing cattle, are not doing cattle rustling. A lot of property is destroyed, citizens are killed (and) officers are killed. Our policy now is to target the lords, we are calling them livestock lords.

"And we shall engage Parliament so that such people are dealt with for committing terrorist acts. The President has pronounced himself on this," he said.

The IG further warned criminal elements around the country that they will no longer have a field day.

He said acts of lawlessness will not happen under his watch saying he won't sleep on the job as petty criminals go about terrorising Kenyans.

"That is the message we are sending as I take charge of the National Police Service. Criminals out there, please bear with me because you will face it. We are not threatening anybody but we are stating things as they are," Koome said.

The IG urged Kenyans to co-exist peacefully as they go about their businesses fully aware that security agencies will protect them.

(Let everyone go about his hustle without disturbing anybody)

Koome thanked President William Ruto for entrusting him with the opportunity to serve at the helm of NPS, and Parliament for approving his nomination.

He further thanked the Judiciary for continuously providing guidance to the criminal justice system and promised to work closely with all stakeholders.

Prior to his appointment, he was serving as the Commandant at the National Police College, Kiganj- main Campus.

Previously, he served as Subcounty Police Commander (OCPD) in Central, Buru Buru, Machakos and Maragua Subcounties and at the Anti Stock Theft Unit-Gilgil.

He also served as the Director of Planning at the Kenya Police Service Headquarters and championed reforms under the Police Housing and Modernisation Programme.

His swearing-in ceremony was presided over by the Chief Justice and President of the Supreme Court Justice Martha Koome and administered by the Deputy Chief Registrar of the Judiciary.

He urged people to live within their means as they have no other option.
News
2 months ago
Post a comment
WATCH: The latest videos from the Star
by EMMANUEL WANJALA Radio, Print & Digital Reporter
News
11 November 2022 - 16:06
Read The E-Paper