He said construction plans are already in the pipeline.

• He told the residents that the construction process is already in the pipeline to facilitate easier waste disposal in Ongata Rongai, Kiserian and Ngong towns.

• He said construction of the sewer line will upgrade the satellite towns of the city and make them more conducive for the residents of Kajiado county. 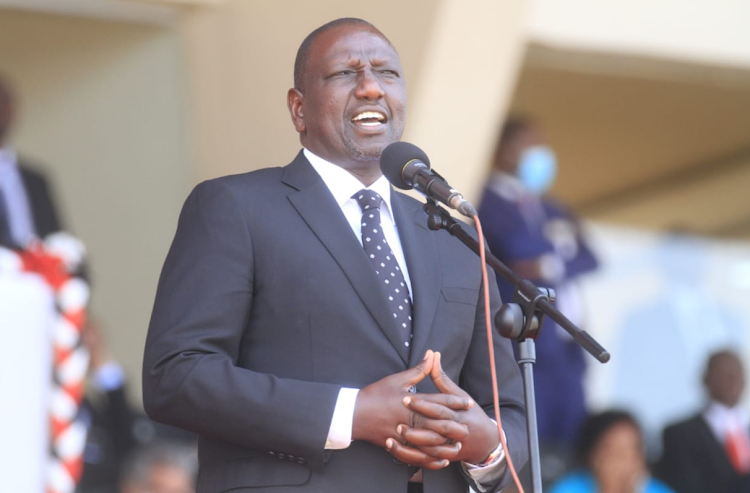 President William Ruto on Tuesday pledged to construct a sewerage system that will serve residents of Ongata Rongai, Kiserian and Ngong towns in Kajiado county.

He told the residents during the tour of the county that construction plans are already in the pipeline to facilitate easier waste disposal from the mentioned areas.

"I know that Rongai residents have experienced shortage of water and there has been no sewage to clean out the dirty water out of the town," Ruto said.

He said the construction of the sewer line will upgrade the satellite towns of the city and make them more conducive for the residents of Kajiado county.

The head of state also said as a way of addressing the issue of incessant traffic jams, he will seek to construct a rail carriage and that will cut cross Rongai, Kiserian and Ngong.

He also said he will upgrade feeder roads especially the one leading to Nazarene university to ease access of the  city by Kajiado residents.

The President took the opportunity to popularise the ambitious Hustler Fund which he said he will launch on December 1.

He said the funds will benefit the ordinary Kenyan as loans will be obtained for as low as 10-20 per cent annual interest, as opposed to the current 200 per cent being offered by shy-locks.

He reminded Kajiado residents of the need to make early preparations to ensure they benefit from the Fund by joining saccos and savings cooperatives.

Pressure mounts on Ruto over pledges — we want them yesterday

President's timelines catching up with him before he can roll out interventions.
Siasa
3 months ago

Head of state is keen on expanding his political territory after a heated and divisive campaigns
News
3 months ago
Post a comment
WATCH: The latest videos from the Star
by NANCY KAMAU
News
18 October 2022 - 19:11
Read The E-Paper