Senators told inter-county taxes are not recognised in law. 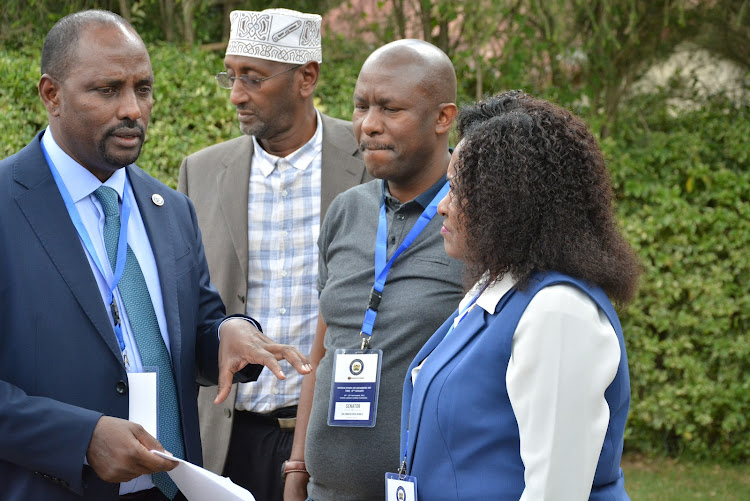 Treasury CS Ukur Yatani has a word with a group of senators during their induction in Naivasha
Image: GEORGE MURAGE

The Senate has been urged to stop illegal taxes counties are charging traders and companies.

Senators were told that the inter-county taxes were not recognised by the law. But stopping them could adversely affect revenue collection for counties.

This emerged during the ongoing induction of senators at Sawela Lodge in Naivasha, where the issues of pending bills and rising wage bills dominated the workshop.

Former Senator Billow Kerrow said it was only KRA that was mandated to collect taxes, meaning that the taxes collected by counties were illegal.

Addressing the senators, Kerrow said the Constitution mandated Parliament to collect taxes through KRA and not county governments.

He singled out branding taxes, where companies ferrying goods from one county to another were forced to pay a tax for their branded cars.

“The so-called taxes by the counties are illegal and unconstitutional as they are not recognised anywhere in the law,” said the former Mandera senator.

In his presentation, Kerrow noted that double taxation was a major blow to investors, a move that was killing the spirit of inter-county business.

“Many investors working between various counties have to pay cess as they enter one county to the other and this erodes investor confidence,” he said.

However, Uasin Gishu Senator Jackson Mandago defended the counties' move to charge the cess, noting that county assemblies had the power to come up with trade regulations.

The former governor noted that the only source of revenue for counties lay in cess and trading business after the national government failed to remit rates.

“Under the municipalities and county councils, state departments were paying rates but since devolution the Treasury has refused to remit these taxes, affecting revenue collection,” he said.

Mandago at the same time noted that running of county hospitals was becoming a major challenge as the small fees collected from patients were being remitted to the Treasury.

He said that this meant that health facilities had to requisition for funds to run their services, a move that was long, tedious and at times unfruitful.

“For years, hospitals have run their services through the small fees collected from patients but this is no longer possible as all the collected funds go first to the Treasury,” he said.

Narok Senator Ledama Olekina said that this could be addressed through the formation of a medical fund for the public health facilities.

“Senate can intervene in this issue by enacting a law in the House where a medical fund can be formed to receive and disburse the collected fees to the hospitals,” he said.

Post a comment
WATCH: The latest videos from the Star
by GEORGE MURAGE CORRESPONDENT
News
23 September 2022 - 23:00
Read The E-Paper