The two champion an almost similar economic revival model of bottom up.

• The two champion an almost similar economic revival model of bottom up.

• Ruto said Kenya will continue expanding its strategic partnership with the US to advance peace . 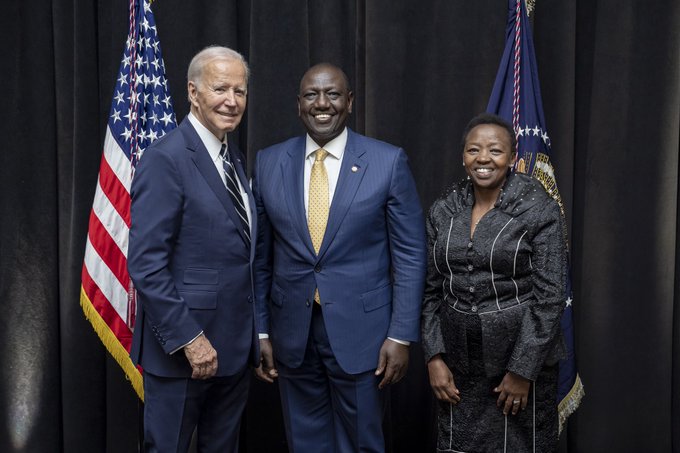 President William Ruto met US president Joe Biden as he winds up his New York trip that saw him take part in the 77th United Nations General Assembly.

The two met on Thursday.

Ruto said Kenya will continue expanding its strategic partnership with the US.

"Kenya will continue expanding its strategic partnership with the United States of America to advance peace and prosperity in Africa," he said.

The two champion an almost similar economic revival model of bottom up.

Earlier in the week, POTUS said trickle-down economics was not working and has never worked for any country's economy.

Biden said his administration will continue building the country's economy from the bottom up and middle out.

The trickle-down theory states that tax breaks and benefits for corporations and the wealthy will trickle down to everyone else to spur economic development.

The bottom-up model was adopted by President William Ruto who anchored his campaigns on it.

He said the bottom-up economic model is a blueprint targeting to promote investments of ordinary Kenyans and empowering them financially so the country can generate taxes to spur the economy.

Earlier in the day, US Secretary of State Antony Bliken pledged to work with the Ruto administration in addressing food insecurity in the country.

The 77th UNGA coincides with the worst drought in the Horn of Africa with many countries in the region including Kenya experiencing unprecedented effects in the last forty years.

Government statistics and data from UN agencies show that 3.5 million Kenyans are in dire need of food.

Among Ruto's agenda at the UN meeting is to hold discussions with world leaders on fertiliser production and green energy aimed at enhancing Kenya’s agricultural production.

UN report indicates that acute food insecurity is expected to worsen from October to January 2023.
News
1 week ago

He gave attention to some of the most pressing issue our society is grappling with.
Opinion
2 weeks ago

Ruto said the country will work with other nations to achieve the goal.
News
2 weeks ago
Post a comment
WATCH: The latest videos from the Star
by MAUREEN KINYANJUI News Reporter
News
23 September 2022 - 07:32
Read The E-Paper