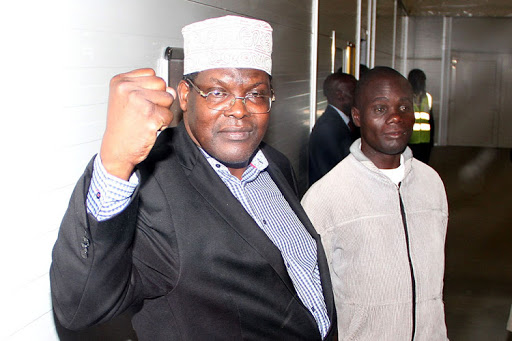 When lawyer Miguna Miguna presided over an illegal swearing-in of the ‘people’s president’ Raila Odinga in 2018,  he never knew he was courting trouble with the State.

At a time when a battalion of lawyers surrounding Raila remained shy and even went underground in administering the oath, the self-styled general defied odds and took charge.

The government, through a letter produced in court after his arrest in February 2018, justified the action to deport Miguna stating he denounced his Kenyan citizenship and instead acquired Canadian citizenship.

Not even Raila would rescue him.

Since then, Miguna has remained in exile.

On Thursday night, however, Miguna announced his return.

“After nearly five years of forced barbaric exile, I am returning home,” he said in a tweet.

“Days after Uhuru Kenyatta, Raila Odinga, Fred Matiang'i, Karanja Kibicho and G Kihalangwa conspired to illegally seize and destroy my Kenyan Passport, President William Ruto has had a new one delivered to me. Waiting for the lifting of red alerts,” he wrote in another tweet.

The trio, he claims, engineered his forceful deportation, despite the existence of court orders.

Loved and hated in equal measures, Miguna who has since shifted his political camp will now be returning at a time President William Ruto prepares to settle in office.

While it is not clear if he is going to land a job in the Kenya Kwanza government, multiple sources who spoke to the Star said he will probably be appointed.

His demeanour is that of a determined and remorseless yet highly-fragile crony who can easily turn into an enemy at the slightest provocation.

Perhaps, the only reason why he developed a soft for Ruto is that he never played any role in his deportation despite being part of the Jubilee which he largely accuses of his suffering.

His return, according to political experts, means an end to the state-backed impunity which had continued to take a toll on the previous administration.

“It also means a defeat of the corrupt networks that had continued to defy court orders and fought back the rule of law,” says Godfrey Sang.

He says this is a restoration of the rule of law and the culture of obeying laws in the country irrespective of status.

Sang says his return will benefit Kenya Kwanza only if he secures an appointment in government otherwise his return might turn out to be a headache.

“He should be handed a job so that he can continue defending the government otherwise his return will be regrettable and a nightmare,” he says.

He says he might also lead a strong movement or resistance against the government hence displacing Raila in his role as opposition leader.

In a past interview ahead of the polls, Ruto said he would ensure Miguna is facilitated to return to the country.

“We will bring back Miguna in the country within the shortest time possible when I become President,” he said then.

“This is because he is a Kenyan and even if he has committed a crime our country has laws in place. I don't see any need for having refugees from other countries while our very own is a refugee in another country.”

Several leaders including Veronica Maina and Samson Cherargei among others have welcomed the news of his return.

His return is already drawing jitters from the Azimio la Umoja even as the Kenya Kwanza treads carefully not to allow him to lead the opposition bandwagon.

In his recent tweet, Miguna told Raila to retire after being defeated saying, “Going forward, I will lead the people our people top Canaan.”

Among the ODM MPs who have taken on Miguna asking him to stop attacking Raila are Edwin Sifuna, Opiyo Wandayi and Samuel Atandi.

They claimed his attacks were unwarranted.

Giving an indication he is ready to work with the Kenya Kwanza, the lawyer recently fired back at former Nyeri Town MP Ngunjiri Wambugu over his statement that the Ruto administration should stop blaming President Uhuru Kenyatta over the country’s economic status.

“Ruto is now in charge. When one wins, work from there, moving forward. You can’t keep saying “we could do this but the guys before us had done that, so we can’t,” he said.

Miguna’s lawyer Adrian Kamotho told the Star that they will be seeking to recover the costs of all cases which were issued by the court including interests.

“The process is ongoing. The Attorney General has told us to accord him time to process. We shall be relying on the goodwill of the new administration which respects the rule of law in ensuring our client gets what is rightfully his,” he said.

Another year away from home: Miguna's fight to enter Kenya

He however, vowed to continue with the struggle until the court order is respected.
News
9 months ago

Kenyans in Diaspora protest against move to block Miguna's return