CJ Koome presides over launch of Appellate court in Nakuru

She challenged the four judges to conclude over 500 pending cases

Chief Justice Martha Koome has launched the Court of Appeal at the Nakuru Law Courts. 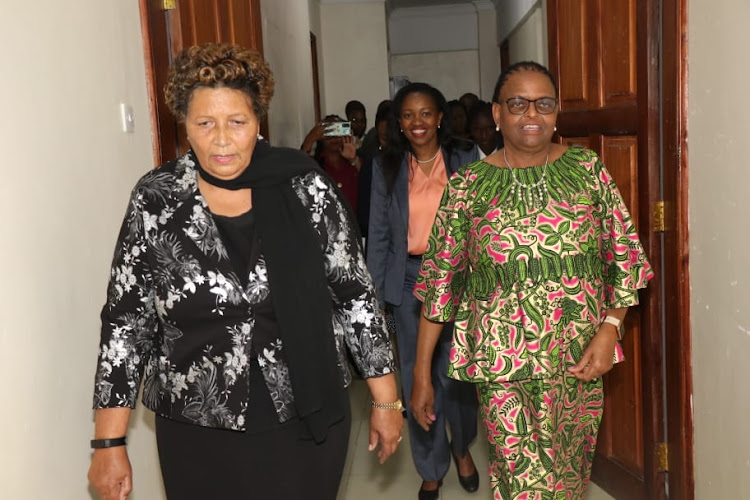 Chief Justice Martha Koome has launched the Court of Appeal at the Nakuru Law Courts.

The court has been having a sub-registry but will now have a fully-fledged station with a permanent bench.

While launching the Court, Chief Justice said that having a permanent bench in Nakuru will reduce the geographical distance travelled by the litigant and the cost of accessing appellant justice.

"The people of the expansive Rift Valley, running from Turkana to the North and south of Narok County, will no longer have to travel to Nairobi or to Nyeri to wait for the court of appeal circuit, they now have there court right here," Koome said.

"This is in line with our vision of social transformation through access to justice where we continuously make interventions to ensure our justice system is accessible, cost-effective timely and efficient, those are aspirations of our people well articulated in our constitution."

The Chief Justice has also challenged the four appellate court judges that will have a permanent bench in Nakuru to conclude over 500 pending cases before the court of appeal in one year.

"We are keen to work with all to support the judges in realizing the target of appeals that are now pending at the court of appeal are concluded within one year," the Chief Justice stated.

On his part, the court of appeal president Justice Daniel Musinga thanked president William Ruto for appointing the four Court appeal judges who had waited for more than three and a half years.

Justice Musinga further noted, the court of appeal was in dire need of judges since Kenyans seeking justice were suffering with pending cases going for years without being resolved.

"I would get letters from over the country, Kenyans crying that their cases have been pending for years and yet they were no judges to deploy to search places. We even closed Nyeri as a station. We thank the chief justice for unlocking bottlenecks," Justice Musinga said.

Eric Theuri, president Law Society of Kenya, said the high court is facing a severe crunch for the lack of enough judges saying the court has about 60 judges and more than a hundred judges are needed to resolve the backlog of cases.

They will work to dispense more than 1,500 pending cases at the court of appeal.

Nakuru Governor Susan Kihika said that the county is privileged to have a permanent Court of Appeal.

"We feel greatly honoured as Nakuru County to have a permanent Court of Appeal to handle appeals emanating from this region," Kihika said.

Other appellate courts are in Nairobi, Mombasa and Kisumu.

The visit came ahead of the launch of the appellate court in the city.
News
1 week ago

Court allows extradition of Kenyan wanted in US over money laundering

The court said the investigations have been done by the US agencies and the witnesses are not in Kenya.
News
1 week ago

It ordered a fresh trial on the Sh27.8 million corruption case.
News
1 week ago
Post a comment
WATCH: The latest videos from the Star
by PERPETUA ETYANG and JAMES MUNYUA
News
23 September 2022 - 18:32
Read The E-Paper