•Muteti opposed Katwa’s line of submissions saying he never made those submissions to the court.

•Katwa said the investigations were allegedly being conducted by an ‘orphaned DCI’. 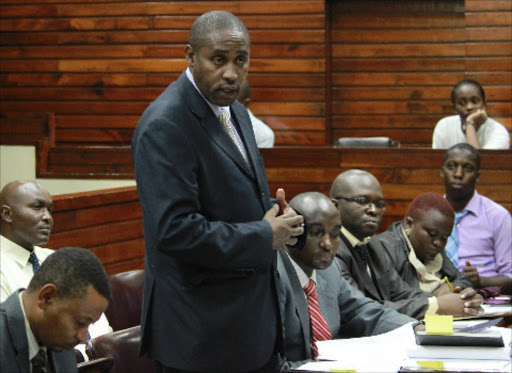 The DPP now claims there is witness interference in the multi-billion Kimwarer and Arror dams case.

Senior Assistant DPP Alexander Muteti told Chief Magistrate Lawrence Mugambi that they are aware that the witnesses are being asked not to appear in court to testify.

“We have reliably learnt of an effort to interfere with witnesses or dissuade them not to appear in this matter,” Muteti said.

He said this after the defense lawyers made an application to adjourn the matter, saying the witness in the dock was not on their initial list supplied to parties.

Muteti said they had initially listed Maurice Juma as the second witness but he has since passed on so they wanted to substitute him with a new witness.

The prosecution had asked the court to summon Gideon Rotich to come and testify today (Thursday) which it did and the witness is expected to testify.

Lawyer Katwa Kigen in response has dismissed the claims, saying they were made sensationally because the media was there.

Things got a bit heated when Katwa accused the prosecution of using political undertones in their claims.

Muteti opposed Katwa’s line of submissions saying he never made those submissions to the court.

The magistrate cautioned Katwa to stick to the issues and not go outside what was submitted by the prosecution in his response.

Katwa said the investigations were allegedly being conducted by an ‘orphaned DCI’.

He told the court that according to their defence, no money was lost in dams project and they have produced evidence to that effect.

In his ruling, Mugambi declined to adjourn the matter saying the prosecution had asked the court to substitute the witness on Wednesday and the defense didn’t object.

The defense had argued that they have over 6,000 documents and they need time to access the documents that the new witness will rely on today.

However, Mugambi said he cannot summon a witness and then send him back without listening to him.

It was mentioned in his capacity as the then Minister of Finance in the coalition government in 2008.
News
2 weeks ago