Want government to open national parks and reserves to livestock, and scale up emergency interventions.

•The Pastoralists Parliamentary Group said the drought and famine situation in                  their counties is dire and needs immediate intervention. 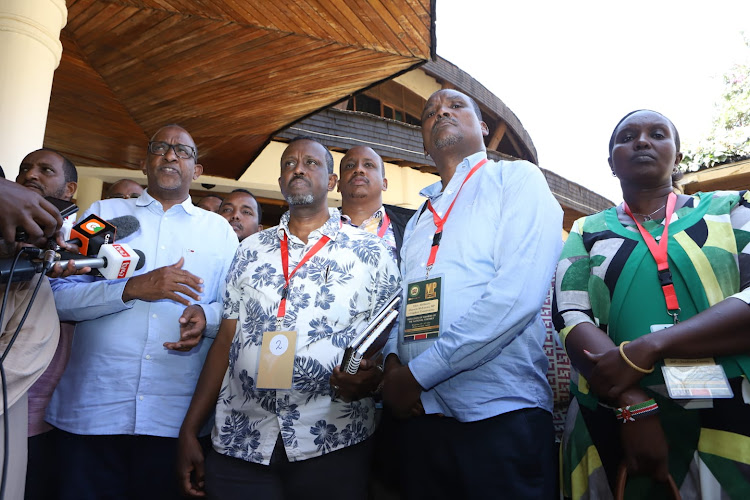 MPs from pastoralist communities want the government to declare the ravaging drought a national disaster.

They also want the government to open national parks and reserves to livestock, and urgently scale up emergency interventions.

The Pastoralists Parliamentary Group said the drought and famine situation in their counties is dire and needs immediate intervention.

Led by patron Garissa Township MP Aden Duale and chairman Bashir Abdullah (Mandera North), they urged the government to declare a national disaster so more funds can be available from the government and the donors.

The leaders addressed a press conference after holding their inaugural caucus meeting at the Safari Park Hotel on Wednesday.

The group has more than 100 legislators from 15 counties.

At least 4.1 million people from across 15 counties are in dire need of food due to hunger and famine.

Thousands of animals already dead due to lack of or acute shortage of water and pasture.

In September last year, former President Uhuru Kenyatta declared the situation a national disaster, effectively opening doors for donors and other well-wishers to help, but not much has been achieved to alleviate the situation.

“We know that the government has put some effort, especially with the issue of the fertiliser. The same way subsidies are being given out, especially on fertilisers, we want the same extended to pastoralists’ community,” Bashir said.

The MP asked the government to allow the pastoralists access to national parks to graze their animals to respond to the emergency.

He said as a result of scarce resources, the scramble for pasture and water has triggered or has the potential to trigger inter-clan conflicts.

“We also urge KWS, I know there are some places where the parks are no-go zones, but in this time of drought, please allow the pastoralists to access the parks for animals to get some pasture,” he said.

Duale urged the government to enhance the distribution of food relief, channel funds for animal uptake, and partially open parks for livestock in areas where the situation is dire.

The former National Assembly Majority leader asked the government to upscale the cash transfer programmes to the affected people and rehabilitate water pans and boreholes.

“As much as fertiliser is good because it is going to increase food production during the advent of the short rains, we expect and urge the government and other international organisations to take this matter very seriously,” Duale said.

Duale urged the national government to advance financial aid to the affected counties to enable them to respond to the emergencies.

“KWS should allow partially those communities that live around the parks. We are the ones who persevere these conservancies. KWS should not allow animals and people to die at their doorsteps,” he said.

Duale urged the pastoralists to accommodate each other the in the wake of the scarcity of grass and water for their animals.

“There are some counties that are a bit better than others, please let's share the little resources,” he said.

“Let our problems not perpetuate into more insecurity. Please accommodate the few livestock of pastoralists that will cross into your county as we wait for rain.”

Say they have seen an opportunity to make money and profit from better prices.
News
4 months ago

They said that youths have the energy and zeal to educate others on matters climate.
News
4 months ago

Is it a cure of the gods, or climate change, bad planning, late intervention?
Counties
4 months ago
Post a comment
WATCH: The latest videos from the Star
by JULIUS OTIENO Journalist, Political and Parliamentary Reporter
News
22 September 2022 - 05:00
Read The E-Paper