Gichuhi won with 40 votes in the first round of voting where all the 42 MCAs voted.

• Gichuhi thanked the MCAs for voting for him and called on MCAs and the executive to work in unity as they start their journey of duty. 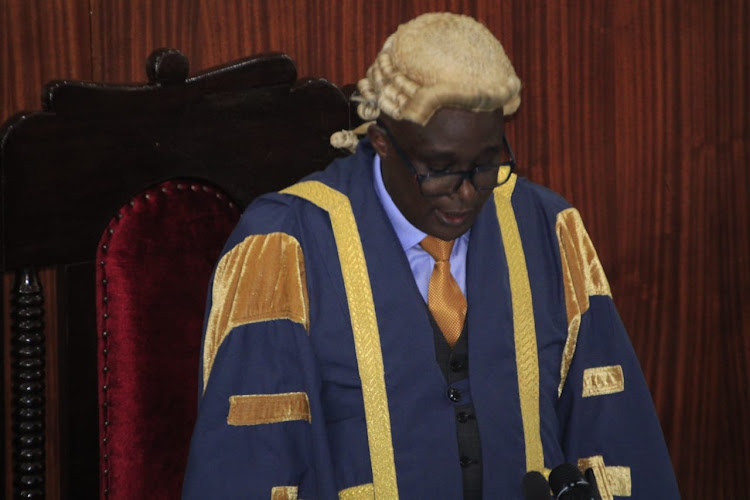 Gichuhi won with 40 votes in the first round of voting where all the 42 MCAs voted.

Gichuhi was declared the speaker-elect by the assembly clerk, Jenard Mwiggeh.

The voting happened after the swearing-in of all the the 30 elected and 12 nominated MCAs.

Gichuhi thanked the MCAs for voting for him and called on MCAs and executive to work in unity as they start their tour of duty.

His election was seen as a fulfillment of a pre-election pact where UDA party had pledged to ensure that at least every constituency had a county seat representative to help deliver victory in each of those constituencies.

Governor Mutahi Kahiga went on record and confirmed that the existence of the pact.

“Wamatinga was campaigning for the governor’s position but after a consensus, we agreed that he vies for the Senate seat so he can deliver the Mathira votes,” Kahiga said.

Nyeri town constituency will now get several CEC seats under the pact.

Mwangi, a lawyer by profession, was prevailed upon by UDA top leadership not to challenge Geoffrey Wandeto who had beaten him during UDA primaries for Tetu constituency MP seat.

He had protested that the exercise was marred by irregularities and vowed to defend the seat as an Independent candidate.

However, the party leadership led by then Deputy President William Ruto prevailed upon him to drop his bid and support Wandeto in a deal struck at the DP’s official residence in Karen, Nairobi.

After the meeting on April 21, Ruto said in a social media post that Gichuhi had conceded defeat.

“The Hustler Nation is grateful to Hon. Gichuhi Mwangi, MP Tetu, for graciously accepting the outcome of our party nominations. You have shown true leadership by agreeing to support Geoffrey Wandeto who emerged the winner,” Ruto said.

Post a comment
WATCH: The latest videos from the Star
by EUTYCAS MUCHIRI
News
21 September 2022 - 14:10
Read The E-Paper