From an early age, he had to learn to get ahead of the curve, one way or another.

•In 2017, he was named as one of the principals of the National Super Alliance, alongside Raila Odinga, Kalonzo Musyoka, and Musalia Mudavadi.

•He was also re-elected in his position as Bungoma Senator but was ousted as Minority leader on March 20, 2018, and was replaced by Siaya Governor James Orengo. A nomination to Parliament in 1992 under the Kanu party ticket, was the beginning of Moses Masika Wetang’ula’s political career.

Born on September 13, 1956, he grow up in a cordial polygamous family of 30 where 15 children were born to his mother.

There were four sets of twins and seven singles, and Wetang'ula was the fourth born one of the singles alongside his brother Tim Wanyonyi,  Westlands MP.

From the setting, it was imperative that from an early age Wetang'ula had to learn to get ahead of the curve, one way or another.

He was to join Friends School Kamusinga for his From 1, but unfortunately, much as he had excelled in his Certificate of Primary Education, his headteacher at Nalondo failed to submit the candidates’ school selections on time, leaving them in post-exam limbo.

For one year, Wetangula attended Busakala Secondary School before joining Teremi High School, where he repeated Form 1 as a prerequisite for admission.

Unfortunately, his uncle could only afford the tuition fees of Sh450.

Wetang'ula joined the University of Nairobi for his UoN Bachelor of Law degree.

Wetang'ula joined the Kenya School of Law after graduating from UoN in October 1981 and then left KSL in  1982.

After school of law, he was sent to Nakuru as district magistrate 2, then to Kithimani in Machakos and was transferred to Kisii and later sent to Rongo in  February 1983.

After talks with his father who wanted him to take responsibility for educating his siblings, he resigned as a magistrate and came to Nairobi with nothing but Sh2,400, his last salary as a magistrate. 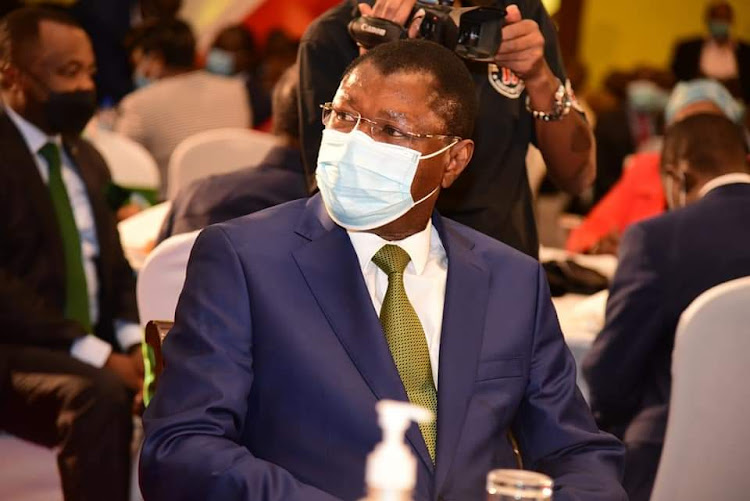 Wetang'ula’s political career started in 1992 when he chose Kanu at a time when the clamour for multi-party democracy had become untouchable and as a reward, the late former President Daniel Moi nominated him to parliament from 1993-1997.

Popularly known as Papa wa Roma, he also served as chairman of the Electricity Regulatory Board after he lost in the 1997 general election

In 2002, Wetang'ula went back to the ballot and was elected Sirisia MP.

Wetang'ula defended his seat in the 2007 general elections and won.

He was elevated to cabinet minister between January 2008 and March 2010, by the late President Mwai Kibaki, succeeding Raphael Tuju.

Wetang'ula's stint as Foreign Affairs Minister was later extended by Kibaki on August 2011 to March 2012. Following a cabinet reshuffling by Kibaki in the same month, he was moved to the Trade Ministry.

In 2013, he joined Ford Kenya and contested for the Bungoma Senate seat, which he won.

He was also selected to serve as Minority leader of the Senate.

On September 30, 2013, the  Bungoma high court nullified his election and the Speaker of the Senate declared the seat vacant on October 16, 2013.

However, in a by-election held on December 19, 2013, Wetang'ula recaptured his Bungoma senatorial seat after garnering 149,458 votes against his main contender Musikari Kombo, who got about half of the votes.

In 2017, he was named as one of the principals of the National Super Alliance, alongside Raila Odinga, Kalonzo Musyoka, and Musalia Mudavadi.

He was also re-elected in his position as Bungoma Senator but was ousted as Minority leader on March 20, 2018, and was replaced by Siaya Governor James Orengo. In preparation for  the 2022 general elections, Wetangula teamed up with Kalonzo and Mudavadi to form the One Kenya Alliance (OKA), which he and Mudavadi later ditched to join Ruto in Kenya Kwanza.

In the new coalition’s agreement, Wetangula would be nominated as the alliance’s candidate for Speaker of the National Assembly, while Mudavadi would go for the Chief Minister post; if Kenya Kwanza won the polls.

This came to pass as on Thursday, the Ford Kenya party leader  was elected and sworn in as Kenya’s eigth National Assembly Speaker .

In the August polls, he had vied  and was elected for a third term as Bungoma Senator but resigned this week on Wednesday.

Wetangula, a close ally to  President-elect William Ruto , won the seat  after amassing 215 votes against 130 garnered by his competitor Kenneth Marende, who bowed out before the second round of voting.

In his maiden speech as the Speaker of the 13th Parliament, he recounted his experience as MP and Senator saying the long journey has taught him that leadership is about service to the people.

As he gave his speech after being sworn in, Wetangula quoted the words 22nd and 24th US President Grover Cleveland to demonstrate his commitment to service.

"Office holders are the agents of the people, not their masters. These words always ring true to me and hence moving on, I'll be your servant and your agent," he said.

Wetangula: I will be your servant, not your master

The former Bungoma Senator also promised to be an impartial leader.
News
4 months ago

Since its independence, Kenya has had less than 10 speakers.
News
4 months ago