While the law recognises and protects persons in police custody, it is silent when 'one is not there'.

• The law protects an individual in custody but not when it does not know where they are.

• Through a public petition, Missing Voices is calling for the 13th Parliament to criminalize enforced disappearances. 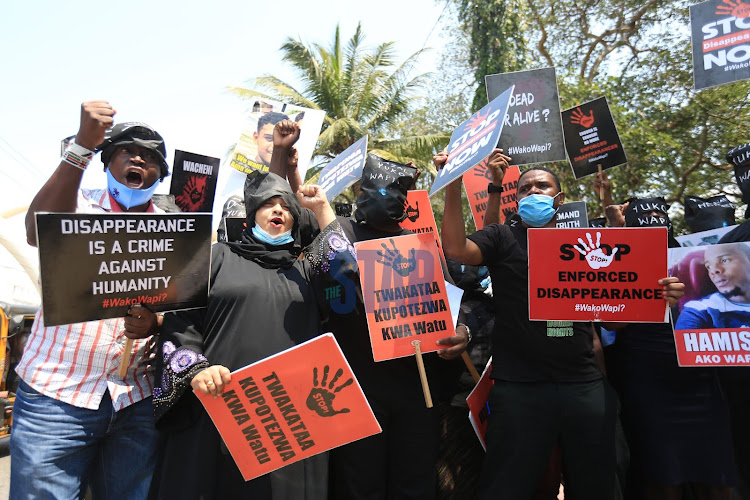 Victims of enforced disappearance are likely to be offended while in detention, Missing Voices, a consortium of organisations, has said.

Speaking during a Twitter space chat by Missing Voices, speakers on Friday said while the law recognises and protects persons in police custody, it is silent when 'one is not there'.

International Justice Mission lawyer Aggrey Juma said though largely protected by Chapter Four of the Constitution on the Bill of Rights, enforced disappearance, by its nature, takes the victims outside that entire protection of the law.

“The law protects you when you are in custody but not when it does not know where you are,"Juma said.

"The law anticipates that, while in custody, you know you will not be tortured, or held longer than the stipulated time. But all that is lost when you are not there [in custody],” he added.

Due to the gap in the law, the advocate said many enforced disappearance cases that have been reported are rarely prosecuted.

The cases can only be resolved through a habeas corpus, where you go to court and request an order that somebody in the custody of government be released, dead or alive.

“The nature of habeas corpus is such that it is reactive in a situation where someone has already been disappeared. Most of the time, like in Willy Kimani case, it is often too late," he said.

Missing Voices has through a public petition called on the 13th Parliament to criminalise enforced disappearances.

It says most of the people who are abducted are often found dead, if the families are lucky.

The group reported three of the people who were reported to have been abducted by state actors this year were found dead.

Director for Missing Voices Houghton Irungu said if the Coroner’s Act had been implemented, the mystery of people disappearing and being found dead would have been resolved.

“One of the cases we've all felt very touched by has been the case of Daniel Musyoka, the IEBC returning officer, who was abducted, and unfortunately was found murdered a few days later, probably in line of his work  as a returning officer,” Irungu said.

He added that there is no specific pattern on how people are forcibly taken away by the state as very diverse groups of people fall victims.

“If we look at the several hundreds of people who have been abducted they are from diverse backgrounds,” he said.

In most cases, however, Irungu said the victims are arrested or stopped in the course of their normal duties, by uniformed or police plain clothes officers.

“The officers sometimes are carrying weapons, but they show no obligation to show their identity documents or an arrest warrant. And in many cases, people are forcibly dragged towards their car and taken to an unknown destination,” said .

The group also wants the new Parliament to implement the 2017 Coroner’s Act, which can be used to fight enforced disappearances.

Among other things, the law provides for the establishment of the Office of the Coroner General, tasked with investigating violent, sudden and suspicious deaths.

Five years after the National Coroners Act was signed into law, the country still grapples with mysterious deaths, deaths as a result of police action and deaths in custody as the government and non-governmental human rights organisations push for the law to be put to effect.

Mwafujo, 35, was arrested in March after a six-year jail term at Shimo la Tewa.
Counties
2 months ago

Case highlighted by activists, prompting cops to say they nabbed him.
News
3 months ago

According to Missing Voices latest data, 75 people have allegedly been killed by the police or disappeared this year.
Counties
3 months ago
Post a comment
WATCH: The latest videos from the Star
by Akello Odenyo Court Reporter
News
06 September 2022 - 21:00
Read The E-Paper