Says her first move will be to ensure the constant availability of drugs in county hospitals. 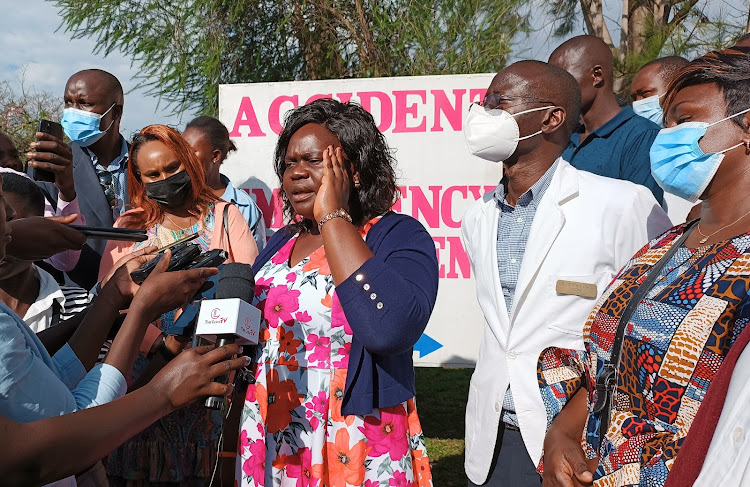 She was sworn in on Thursday.

Addressing the press within the facility, the governor said health is the most vital aspect of life her administration will give more focus on.

“My government will ensure health is our first priority. I will still stand firm on my all-time statement that our people should not go to Kisii to seek medical services but rather access those services right here,” Wanga said.

She stressed that her first move will be to ensure the constant availability of drugs in the county hospitals.

Wanga commended healthcare workers for their efforts despite the hurdles they face while serving patients.

“I want to thank all the healthcare workers who have been working so hard to ensure that our people receive medical attention despite numerous challenges,” she said.

The governor also promised to improve the infrastructure of the facility as well as in other public hospitals by constructing more buildings to enhance service delivery.

However, Wanga said all the changes cannot be done in one day and residents must be patient and give her administration enough time to implement health reforms.

During her swearing-in ceremony, Wanga said good health goes hand in hand with food security, adding that she would ensure that agriculture is also prioritised.

“Agriculture is a major backbone of the economy which essentially supports the largest livelihoods of up to 80 per cent of our population,” Wanga said.

She promised that her government will put in place measures to support value addition on local produce through agro-processing.

“We will invest in value addition as well as providing subsidised farm inputs to optimise our agricultural potential,” the governor said.

"These include maize and sunflower in Gwasi, groundnuts in Ndhiwa, sweet potatoes in Kabondo Kasipul, cotton in Karachuonyo and pineapples in Kochia."

On the other hand, the governor said the blue economy is an important sector that should be exploited to its full capacity.

She added that having closer proximity to the world's largest water body is advantageous towards the realisation of the same.

“We are going to revamp the fishery sector and work with our 146 beach management units in the realisation of that,” she said.

The former woman representative said the project will only be possible through the improvement of the roads leading to beaches, cold storage, provision of security for the fishers and reviving of the fish processing plant in Homa Bay.

“My administration will provide fingerlings and fish cages to transform them from being just fisher folks to fish farmers,” Wanga said.

During her tenure as the chairperson of the Finance and Planning Committee in the National Assembly, Wanga lobbied for the allocation of Sh300 million to purchase a ferry to ply the waters of Lake Victoria contributing to the blue economy.

Says medicine and medical items used in managing diseases are essential and must be available in health facilities.
Counties
3 months ago

Some of them are Arujo Animal Feeds, Kigoto Maize Mill and Homa Bay County Stadium.
News
3 months ago