Four IEBC Commissioners said they could not take ownership of the results because of its opaque nature.

• She claimed their legal team has assured them that irregularities that led to declaration of Ruto will not allow his 'election' to stand.

• "What transpired yesterday is monumental electoral fraud that has also been likened to a civilian coup," Wanga said. 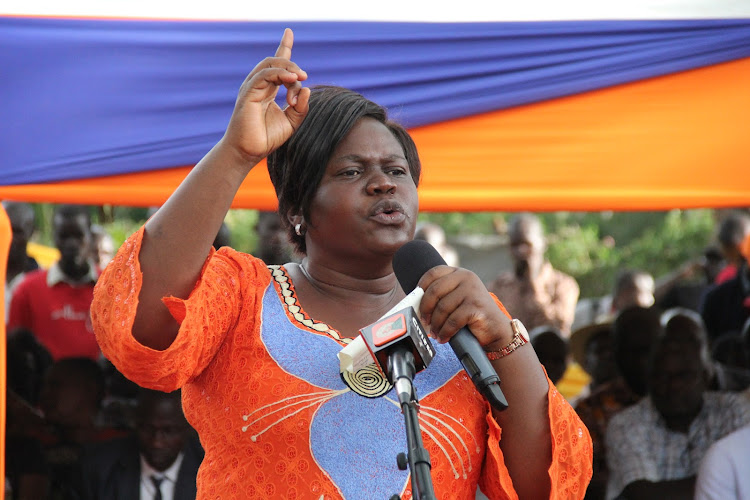 Homa Bay Governor-elect Gladys Wanga has said that the declaration of William Ruto as President-elect will not stand.

In a statement on Tuesday, Wanga termed the whole exercise as a 'monumental electoral fraud'.

She claimed their legal team has assured them that irregularities that led to the declaration of Ruto will not allow his 'election' to stand.

"What transpired yesterday is monumental electoral fraud that has also been likened to a civilian coup," Wanga said.

"Our very able legal team has assured us that the irregularities, the election malpractices and the lack of transparency with which Chairman Wafula Chebukati conducted the Commission’s business are so glaring that yesterday’s declaration cannot stand."

She assured Raila supporters that Azimio la Umoja's legal team will do all that is within their power to ensure the right winner of the election is announced.

"That the exercise was deeply flawed was confirmed by four commissioners who constitute the majority of the IEBC commission. So this matter is not over," Wanga said on Facebook.

On Monday, shortly before the announcement of the presidential election results, four commissioners while speaking to the media said they would not be part of the results that were announced by IEBC Chairman Wafula Chebukati.

"We have done the 2022 general election in the most efficient manner. We have ensured that all the challenges have been contained... We have made sure that we have improved the standards and we say as a fact, as commissioners we have done a good job," she said.

"But some things need to be put out there as you can see the four of us are here and not at Bomas where the results are going to be announced because of the opaque nature of how this phase has been handled."

The IEBC chairperson was flanked by three of her colleagues Francis Wanderi, Irene Masit and Justus Nyangaya.

The four said they cannot take ownership of the results because of its opaque nature.
News
5 months ago

Two of our commissioners, CEO are in injured - Chebukati

Chebukati said he has also been intimidated, but he has a duty to perform for Kenyans.
News
5 months ago