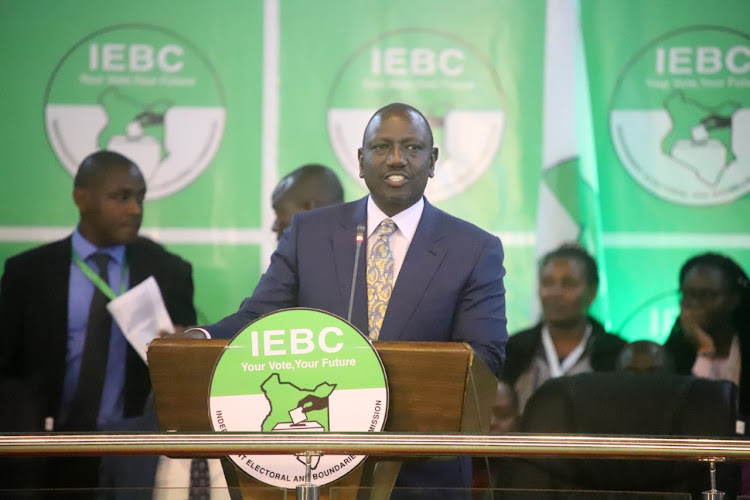 Deputy President William Ruto, the 'hustler in chief' who once sold chickens by the roadside, on Monday was declared President-elect of the Republic of Kenya.

He broke the 'curse of the deputy presidency' because never before has a Number Two succeeded his president.

He exceeded the 50 per cent plus 1 threshold.

The declaration of Ruto as President-elect was made by chairman Wafula Chebukati of the Independent Electoral and Boundaries Commission after nearly six days of tallying at the Bomas of Kenya.

The announcement was delayed amid scuffles and allegations of vote-rigging by Raila's campaign team and a sudden split in the commission over what four commissioners called “opaque results”.

The commission has seven members, so dissenters were in the majority.

At a hastily called press conference, they rejected the outcome and said they would not take "ownership" of the announcement Chebukati was about to make.

It was the first time Ruto, 55, had run for president, having served as deputy president for nine years. He however fell out bitterly with President Uhuru Kenyatta, who backed Raila to succeed him.

Chebukati said he had done his duty despite receiving threats.

"I took an oath of office to serve this country and I have done my duty in accordance with the Constitution and the laws of the land," Chebukati said before declaring Ruto the winner.

He went on, “We have walked the journey of ensuring that Kenyans get a free fair and credible election. It has not been an easy journey — right now, two of my commissioners and the CEO are injured."

He also made history as the first second in command to succeed his boss in an election.

He campaigned on an economic recovery platform, promising to adopt a bottom-up model, which would empower ‘hustlers’ and end the dominance of ‘dynasties’.

He launched his campaign by emphasising hustlers versus dynasties, its symbol being a wheelbarrow. That narrative appealed to many people but was criticised for being divisive.

The establishment felt shivers and thought its interests would be challenged.

Ruto moved to the centre but always emphasised enterprising people who needed opportunities.

“There are no losers. The people of Kenya have won because we raised the political bar,” President-elect Ruto said in a brief speech after the declaration of his win.

He went on, “I want to promise all the people of Kenya that whichever way they voted, this will be their government."

In his speech Ruto thanked the electoral commission for overseeing the election.

"It is a wonderful evening… all sovereign power belongs to the people of Kenya," Ruto said, calling Chebukati a "hero" for ensuring transparency and credibility.

Ruto praised the IEBC for conducting a free and fair election, saying making public the forms was critical to credibility and transparency.

“I say with conviction the IEBC amazed all of us. With the results in the public portal, all servers were open,” Ruto said in his victory speech.

He went on, “All you needed was a simple calculator and you would have the results. Chebukati is our hero…soft spoken but firm. The public portal became the game changer in this election."

Ruto said he wanted to be the President of all, and said this election was an advance because issues were more important than "ethnic cocoons".

"To those who have done many things against us, I want to tell them there's nothing to fear. There will be no vengeance. We do not have the luxury to look back. We are looking into the future," he said.

He went on, “I am acutely aware that our country is at a stage where we need all hands on deck to move it forward. We don’t have the luxury to look back or point fingers or apportion blame.

"We must close ranks and work together for a functioning democratic prosperous Kenya."

The DP has previously said he has been harassed and intimidated by President Uhuru Kenyatta and his officers over his presidential bid.

Following sharp differences that played out between him and his main opponent Raila, the DP used his victory speech to extend an olive branch.

“I want to thank my worthy competitor for a campaign in which we all dwelt on issues and tried to sell an agenda to the people of Kenya. I will work with all elected leaders and all leaders in Kenya so we can fashion a country that leaves nobody behind,” he said.

The President-elect promised to run an accountable government that respects the principle of separation of powers.

“Kenyans have assigned us responsibilities. I will run a transparent, open, democratic government. I will work with the Opposition to the extent that they provide oversight to my administration,” he said.

Ruto downplayed his broken ties with the President, saying having worked with him for 10 years, he will build on his legacy.

“I will build on the foundation that Uhuru and I put together and take this country to the next level,” Ruto said.

Ruto had arrived at the National Tallying Centre at Bomas moments before 3pm accompanied by his wife Rachel, running mate Rigathi Gachagua and ANC leader Musalia Mudavadi, among others.

Ruto’s mother Sarah Cheruiyot made her way to Bomas at 4pm. She was late joining family members who had arrived earlier. However, she was later evacuated after chaos broke out in the auditorium.

During his electrifying campaigns across the country, Ruto marketed the bottom-up economic model as the best solution to the country's economic challenges.

Violence broke out just before the declaration when the electoral commission’s vice chair and three other commissioners told journalists at a press conference that they could not support the “opaque nature” of the final phase.

“We cannot take ownership of the result that is going to be announced,” deputy chairperson Juliana Cherera said.

At Bomas, police surged in to stop the pushing, shoving, shouting and throwing of chairs.

Diplomats and international elections observers were whisked out of the tallying hall before Chebukati spoke.

The sudden split in the commission came minutes after Raila’s chief agent Saitabao ole Kanchory said they could not verify the results and made allegations of “electoral offences” without giving details or evidence.

Raila was not at the Bomas.

After elections, what next?

IEBC chair Wafula Chebukati announced Ruto as the winner of the elections
3 months ago
Post a comment
WATCH: The latest videos from the Star
by STAR TEAM
News
16 August 2022 - 05:00
Read The E-Paper