After elections, what next?

The transition can take days, weeks or months

• The road to new government is direct or paved with petition, rerun and run-off 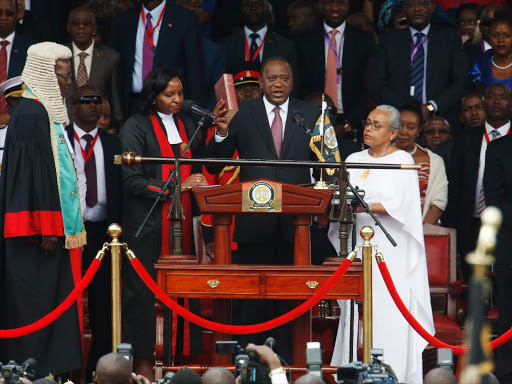 Chief Justice David Maraga and Registrar of the Judiciary Anne Amadi look on as President Uhuru Kenyatta, accompanied by his wife Margaret Kenyatta, takes the oath of office for his second term at Kasarani stadium on November 28, 2017
Image: FILE

The 2022 General Election was held last week in line with the constitutional provision that a General Election be held on the second Tuesday in August in every fifth year. Once the election is done, what follows?

The electoral commission has a seven-day window to declare the result of the election and deliver a written notification of the result to the Chief Justice and the incumbent President.

In the presidential election, if any candidate gains more than half the valid votes cast, and at least 25 per cent of votes in at least 24 counties, such a candidate shall be declared the winner. If this does not happen, a fresh election will be conducted within 30 days after the previous election.

If questions arise regarding the validity of a presidential election, a person may file a petition to the Supreme Court to challenge the election within seven days after the declaration of the results. This is the only case that can be filed at the Supreme Court as a court of first instance.

The Supreme Court will hear and determine the petition within 14 days and its decision shall be final. If the Supreme Court declares the election to be invalid, a fresh election will be conducted within 60 days after the decision is rendered.

Once a President is elected, if no petition is filed, the President-elect shall be sworn in by the Chief Justice or the Deputy Chief Justice on the first Tuesday, after the 14th day following the declaration of the results. If a petition was filed and the election is upheld, the President-elect will be sworn in on the first Tuesday following the seventh day after the pronouncement of the court upholding the election.

In the other elective posts, the candidate with the most number of votes is declared the winner. Any person who wishes to contest the elections of these posts may do so by filing a petition in the High Court. The decision rendered may be appealed, which sometimes has the effect of making candidates spend much time and resources fighting legal battles.

Now you know what to expect over the coming weeks, or months.

Why Uhuru could remain in office longer

The president exit soonest September 3 and latest by May 2.
News
1 month ago
Why Kenyans are worried about delayed results
Post a comment
WATCH: The latest videos from the Star
by Neil Samuel @neilsamuel271
Lifestyle
15 August 2022 - 05:05
Read The E-Paper