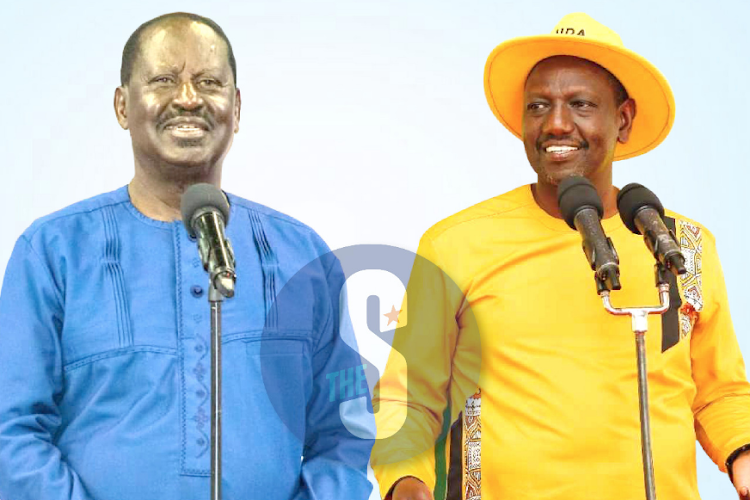 The two-horse race between William Ruto and Raila Odinga looks destined for a neck and neck finish.

The nation was on tenterhooks last night with early results showing no clear lead for the archrivals even as less than impressive turnout looks to be a major factor in the end result.

At the time of going to press at 9pm Tuesday, the two were neck and neck, with Ruto slightly leading by 49.86 per cent and Raila having 49.66 per cent.

However, this was just a small sample of results from various polling stations tallied by the Star.

Sample Forms 34A seen by the Star showed that Raila had taken the lead in many areas in Busia and Kakamega counties while Bungoma was deadlocked.

Ruto was also leading in many parts of Rift Valley and Central Kenya, while Raila was ahead in Nyanza, Nairobi, Ukambani and the Coast.

Northeastern, Maa Nation and areas in Turkana and West Pokot were neck and neck.

Kenyans went to the ballot yesterday to choose a president and five other elective leaders.

The general election was marred by widespread voter apathy that could deal a deadly blow to the two leading presidential contenders.

By 4pm Tuesday, one hour before polling stations closed, the electoral commission said the voter turnout was at 56 per cent.

However, this was exclusive of voters identified manually after hitches rocked electronic identification in some parts of the country.

Analysts projected that the overall turnout could be slightly over 60 per cent for an election billed as a tight contest between main opponents Raila Odinga and William Ruto.

It was not immediately clear which of the country's eight regions had been hit by the biggest voter apathy.

However, a spot check by the Star indicated that President Uhuru Kenyatta's Mt Kenya backyard was hard hit, with polling stations missing the long queues that were witnessed in previous elections.

The region, which is viewed as one of Ruto's political strongholds, has about 5.8 million registered voters, and the suspected apathy could hurt his bid.

In both 2013 and 2017 elections when Uhuru defeated Raila, the national voter turnout stood at 78 per cent and 86 per cent respectively.

Uhuru and Ruto then galvanised their supporters around their indictment by the International Criminal Court to campaign against Raila.

Leaders from Mt Kenya said the lack of a front runner presidential candidate from the region triggered voter apathy.

"For sure, that great motivation is not there. For me, I estimate may be 60 to 65 per cent turnout. That is why we were fighting for one man, one vote," Kieni MP Kanini Kega said after casting his vote.

In most parts of the country, voting was generally peaceful and smooth despite some delays in opening of polling stations and problems in some areas with the Kiems kits used to identify registered voters.

A total of 22, 120, 458 registered voters were expected to participate in the general election to elect president, governors, senators, woman representatives, Members of Parliament and MCAs.

To win the presidential race in the first round, a candidate needs more than half of all the votes cast across the country and at least 25 per cent of the votes cast in a minimum of 24 counties.

The vote in 46,229 polling stations followed an intense campaign dominated by debates about the cost of living, unemployment and corruption.

The Independent Electoral and Boundaries Commission said that it will hold election on August 23 in areas where polling was suspended.

There were several mix-ups of ballot papers in the areas on the eve of the polls, again raising questions about the electoral agency's level of preparedness.

Among the regions where polling was suspended include Kitui Rural and Rongai due to unavailability and photo mix-up in ballot papers in the two constituencies respectively.

Others are Kacheliba and Pokot South constituencies, as well as Mombasa and Kakamega gubernatorial seats.

Elections at Eldas constituency were adjourned to Wednesday morning after armed groups engaged in gun battles throughout Monday night outside the IEBC offices.

There were also some complaints about the break down of the electronic fingerprint equipment used to identify voters.

But the electoral commission has said that only 200 kits broke down out of a total of more than 46,000. The commission had also given six backup kits per a ward across the country.

“It's not widespread. Technology do breakdown and when they do, we have mechanisms of rectifying it,” IEBC commissioner Justus Nyaganya said.

On polling day, the agency was forced to approve the use of the manual register in some areas after the Kiems kits failed.

The IEBC said it had allowed the use of the manual voters register in 84 polling stations in Kibwezi constituency, and 54 stations in Malava, Matungu, Mumias East and Mumias West constituencies.

“In this case, it has been ascertained as the commissioners have written emails and therefore have been given the leeway to use manual register,” IEBC vice chairperson Juliana Cherera.

The failure of the Kiems technology to identify voters in some areas forced Raila's legal legal adviser Paul Mwangi to write a protest letter to the electoral agency's chairman Wafula Chebukati.

Mwangi said that the failure was largely experienced in the Azimio strongholds.

“The Raila Odinga presidential campaign is appalled by the large number of Kiems kits that have failed since today (Tuesday) morning all over the country, despite the numerous statements of comfort that have come from you personally and from some of your commissioners that technology will not fail on voting day,” Mwangi said.

Speaking earlier on Tuesday as he left his Karen home to cast his vote, Raila said they had suspected the failure, which is why they asked for the inclusion of the manual register.

"We had suspected some people cannot be identified biometrically, and they have to revert to the manual register. That is what we had said all along and those who opposed it have not been identified, so they are beneficiaries of what they were opposing," Raila said.

He later voted around 1pm.

DP Ruto, who voted at 6am at Kosachei Primary School in Turbo constituency, exuded confidence that he will emerge victorious in his first run for the presidency.

"In a moment like this is when the mighty and powerful come to the realisation that it is the people who make the big decision...I look forward to a victorious day," he said.

Ruto, who arrived just two minutes before the polling stations were opened accompanied by his wife Rachel, said he woke up early so that he would not inconvenience his neighbours.

As the election got underway, there were isolated cases of violence in some parts of the country.

Residents said an altercation over political allegiance to some candidates sparked the shooting at the Bosiabano outside Suneka town at night.

There were scanty details on the identity of the shooter, though some residents said he is a member of a local vigilante.

In Mombasa, Mvita UDA candidate Omar Shallo was among three people who were arrested after chaos erupted at Tudor Primary School.

The chaos began after ODM and UDA supporters engaged in a physical confrontation at the station in Mombasa county.

On the eve of the voting day, two police officers were arrested for allegedly ferrying marked election materials in Kilgoris, Narok county.

The three are said to have been stopped by suspicious members of the public, who quickly informed security officers.

He named the officers as sergeants Micheal Cheptoo and Daniel Chepkwony.

Eldas voters to cast their ballot on Wednesday - IEBC