Her remarks comes weeks after Ruto claimed there were attempts to rig the election.

•During the presentation at State House, Whitman pledged to use her experience to increase bilateral trade and investment ties between the two countries, noting that Kenya is a dynamic economic engine and technology leader in East Africa. 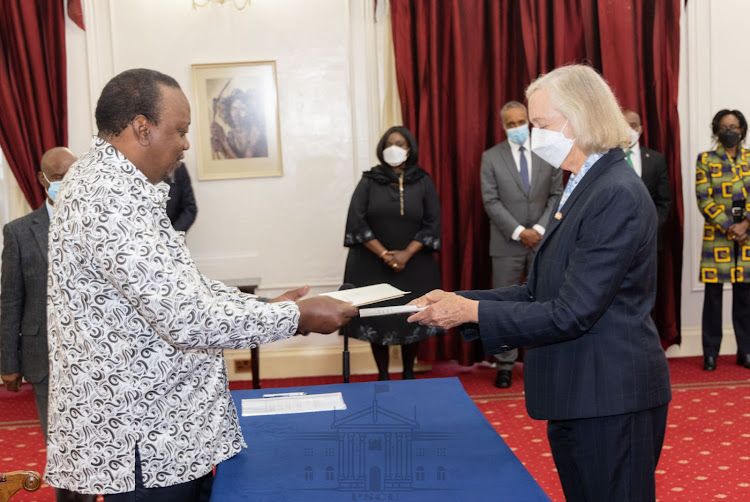 Incoming US Ambassador to Kenya Margaret Whitman has expressed confidence that the August 9th general elections will be free and fair.

Speaking when she presented her credentials to President Uhuru Kenyatta, Whitman said Kenya will also have a peaceful transition.

“…I have no doubt Kenya will showcase for the world what free and fair election looks like and how peaceful transitions work,” the new Ambassador to Kenya said.

Her remarks come weeks after DP William Ruto claimed there were attempts to rig the election.

Ruto alleged that nearly a million voters, mainly from his strongholds, have been irregularly removed from the voters' register.

However, Independent Electoral and Boundaries Commission chairman Wafula Chebukati dismissed the claims, saying "data of all voters is intact.”

Raila sensationally claimed- without providing evidence- that some counties have experienced unexplained one million increases in their voters in the register.

During the presentation at State House, Whitman pledged to use her experience to increase bilateral trade and investment ties between the two countries, noting that Kenya is a dynamic economic engine and technology leader in East Africa.

“Before I left Washington, President Biden reminded me that one quarter of the world’s population will reside in Africa by 2050. Pointing to Kenya’s leadership on the continent and beyond, President Biden asked me to use every tool at my disposal to deepen ties between our great nations,” she said.

The new German Ambassador to Kenya said his country has been a close and committed partner of Kenya for decades and he is determined to develop that cooperation further.

On their part, the new Ethiopian and Sudanese Ambassadors pledged to work hard to ensure they succeed in enhancing the robust multifaceted diplomatic relations between Kenya and their respective countries.

Receiving the credentials from the new envoys, Uhuru assured them of his support as they embark on their tour of duty in the country.

The eleaders said elections are a celebration of freedom and choice.
News
5 days ago

Chebukati said they are prepared for a free, fair and credible elections.
News
1 week ago
WATCH: The latest videos from the Star
by NANCY AGUTU Deputy Digital Editor
News
06 August 2022 - 09:21