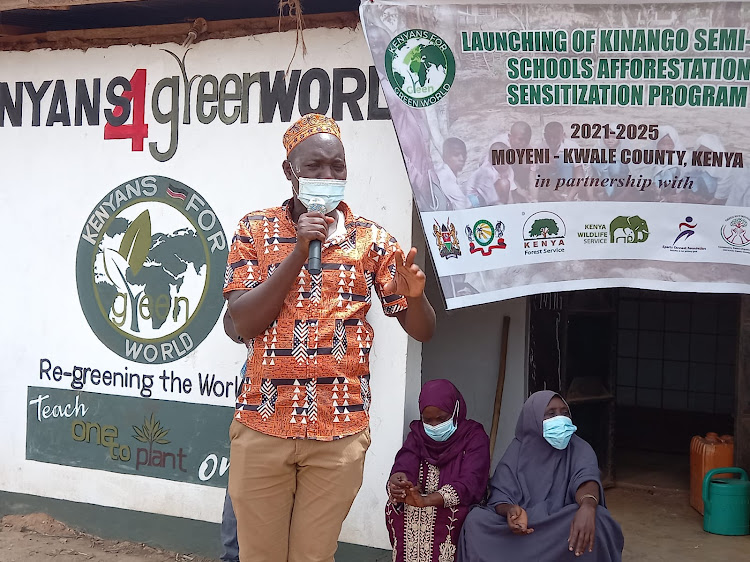 Kenyans for Green World, a Kwale-based NGO, in partnership with Base Titanium has launched a five-year environmental programme in Kinango schools to help combat deforestation and realise the 10 per cent forest cover.

It targets to have one million trees planted within five years to mitigate the effects of climate change.

A vice that has contributed to the effects of climate change and posed a great threat to both humans and wildlife as drought intensifies.

The subcounty was last year mentioned among the drought hardest hit areas in Kenya.

Almost 90 per cent of water sources relied on by residents for domestic use were reported to have completely dried up in Kinango.

Over 200,000 people were faced with starvation, and thousands of livestock starved to death due to a lack of pasture and water in Kinango.

According to Kenyan for Green World director Omar Weko, the programme has been launched in both primary and secondary schools where they will be working with school children to help conserve the environment.

"We are educating children on the importance of environmental conservation so that they can pass the knowledge to the community," he said.

This is because currently, the majority of the Kinango children have inherited the art of charcoal burning from their parents.

He said a huge percentage of the children go for small trees which they burn and sell as charcoal in Kwale town.

Nyawa said the children are always seen carrying small sacks of charcoal looking for customers on weekends and sometimes during school time hours.

Moyeni area was mentioned to have the highest number of children doing the charcoal business.

However, the programme is aimed at sensitising children against environmental pollution and stem the vice.

Weko said the initiative will be implemented through the schools' environmental clubs.

The first phase of the programme involves 11 schools.

Weko said they also intend to improve food security through the plan to reduce overreliance on food aid.

Residents have been depending on government and private sector food relief programmes for survival each time drought strikes.

Weko said they will be encouraging communities to plant both terrestrial and fruit trees to promote food production.

The officer expressed fears that Kinango will soon develop into a desert if appropriate measures won't be taken.

“The climate change in this area is due to our harmful livelihood activities and if we are not going to be cautious worse is yet to come," he said.

Base Titanium environmental superintendent Geoffrey Mwania said the programme is scheduled to provide solutions to the area's perennial problems.

He said with enough involvement from stakeholders, the effects of climate change can be reversed successfully.

Group saves mangroves along a creek, this leads to a crab restaurant
News
2 weeks ago

One fish cage can hold 1,000 fish and produce over 2,000kg within six months.
Counties
2 weeks ago

Conservator Kamau says one of the strongest nature-based enterprise opportunities they found is ecotourism
News
2 weeks ago
“WATCH: The latest videos from the Star”
by SHABAN OMAR
News
05 August 2022 - 23:00
Read The E-Paper