Second suspect wanted in US over narcotics arrested in Meru

•Abdi Hussein Ahmed was Tuesday brought to Nairobi ahead of planned processing and extradition to the US, police aware of the developments said.

•He was arrested in an early morning raid in Maua, Meru County, where he was staying in a rented room. 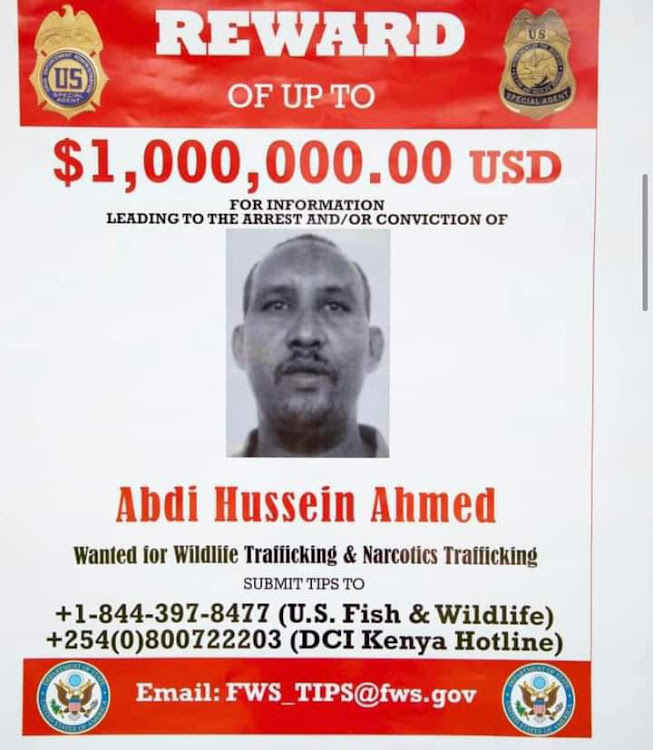 A second man wanted by the US government over drug trafficking claims has been arrested in Meru.

Abdi Hussein Ahmed was Tuesday brought to Nairobi ahead of planned processing and extradition to the US, police aware of the developments said.

He was arrested in an early morning raid in Maua, Meru County, where he was staying in a rented room.

This is after detectives received information on his whereabouts through a caller. He was later taken to the DCI headquarters for processing.

His accomplice Badru Abdul Aziz Saleh was in May this year arrested as he tried to flee to Somalia and was brought to Nairobi. He was later extradited to the USA.

No details were available on who tipped the officials about the whereabouts of both suspects now and if the ransom would be paid out.

But an informed officer said: “The bounty that was given out was real and whoever was responsible for his arrest will definitely get the money. For safety reasons, we can’t discuss that further”.

Aziz and Ahmed are accused of being part of an international organised criminal network that trafficked wildlife and sought to traffic illicit drugs to the United States.

They are accused of conspiring to smuggle at least 190 kilograms of rhino horns and 10 tonnes of ivory.

Acting US ambassador to Kenya Eric Kneedler said then the rhino horns and ivory were valued at $7 million (Sh800m).

He said the two are major violators of US narcotics and wildlife trafficking laws and are wanted for their alleged involvement in an international organized criminal network that trafficked wildlife from Africa and sought to traffic illicit drugs to the United States.

The indictment against the two further alleges a conspiracy to distribute approximately 10 kilograms of heroin.

“Eradicating drug and wildlife trafficking are priorities of the Biden Administration.  We are grateful for the continued partnership of the Government of Kenya to capture and arrest members of these criminal networks” said Kneedler.

DCI boss George Kinoti said then the two, with Mansur Mohamed Sahul, were arrested on several occasions between December 2012 and May 2019 and are wanted for the crimes.

He added the suspects were involved in the transportation, distribution and smuggling of 190 kilos of rhinoceros horns, and 10 tonnes of elephant ivory from different countries in Africa, including Kenya which they transported to the US.

Kinoti said the suspects also transported and distributed one kilogram of heroin from Kenya to the US.

"On June 14, 2019, the United States Southern District Court of New York indicted the three individuals. Interpol issued a red notice with respect to the said suspects, Sahul Mansur Mohamed and Ahmed Abdi Hussein, while a warrant of arrest was issued in respect to Saleh Badul," Kinoti said.

Saleh was later arrested at the Busia border by DCI detectives on June 11, 2019, and arraigned at the Jomo Kenyatta International Airport law courts, before he was released on Sh200 cash bail.

He added the suspect was directed to report to detectives every two weeks.

"However, upon release on bail, he disappeared up to December 2019 when he was last seen," Kinoti said.

He was part of an "international conspiracy" responsible for the slaughter of more than 100 elephants and dozens of rhinos, federal prosecutors in New York said.

It allegedly amounts to an estimated $7.4m amassed over seven years.

Damian Williams, the United States Attorney for the Southern District of New York, announced in May he pleaded guilty to conspiring to traffic in rhinoceros horns and elephant ivory, both endangered wildlife species, which involved the illegal poaching of more than approximately 35 rhinoceros and more than 100 elephants.

He also pleaded guilty to conspiring to distribute heroin to a buyer located in the United States.

He is set to be deported to his country.
News
3 months ago

Informant to get Sh116 million after suspect arrested