She argued that some of those shortlisted are not ODM members.

•Kwamboka on Saturday asked the Political Parties Tribunal to order the party to produce copies of files of the 16 shortlisted candidates published by the electoral agency on July 27. 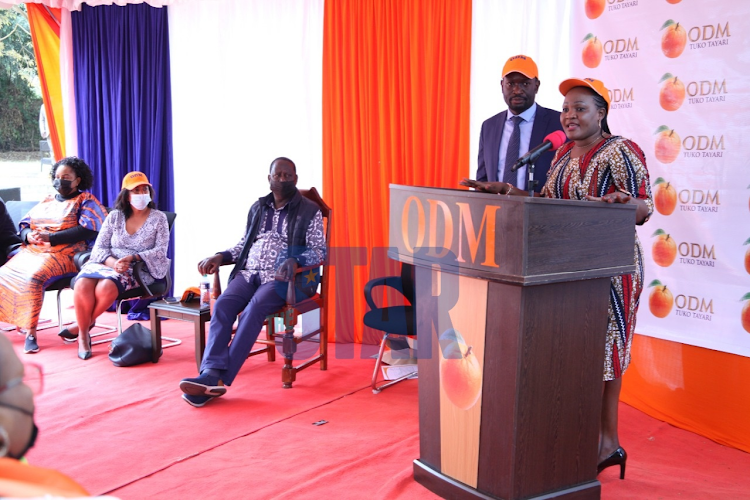 Nominated Senator Beatrice Kwamboka has appealed against a decision by the Orange Democratic Party that left her out of the 16 shortlisted candidates for Senate nomi9nations.

Kwamboka on Saturday asked the Political Parties Tribunal to order the party to produce copies of files of the 16 shortlisted candidates published by the electoral agency on July 27.

She said the files should be produced before the tribunal and her.

Her Lawyer Danstan Omari, told the Tribunal that some of the names that were shortlisted as party list candidates are not members of ODM.

“Whole party list actuated by nepotism. Party-list did not show equal representation in terms of ethnicity. The list is a product of corruption,” Omari told the Tribunal.

Omari said ODM failed to carry out due diligence on all members who put forward their applications for nomination and that anybody saying Kwamboka cannot be nominated twice is a ‘fallacy’.

Omari cited one Catherine Okoth. He said the party nominated Catherine twice before the 2013 elections.

“She has been nominated twice as an MCA, Nairobi County and currently serving and she has also been shortlisted,” said Omari.

The Tribunal heard that National election board Chairperson Catherine Mumma who is number 1 on the senate list, has nominated herself and further nominated Rose Nechesa, who appears at number 3 in Bungoma County.

In a brief rejoinder, the party told the Tribunal that its incumbent upon Kwamboka to demonstrate how her rights or law were breached.

“She needs to come before you with reasonable cogent evidence before the burden shifts to the party,” said ODM.

The party told the tribunal that Kwamboka submitted an application for consideration for the party list and she was not considered.

“All these other issues being raised against nominees to the party list are afterthoughts. They are mere allegations.”

The Tribunal after hearing both parties retreated to write its decisions and said the judgement will be delivered by email.

Asige has been nominated to senate alongside her male counter part Kakiri Ochieng.
News
2 months ago