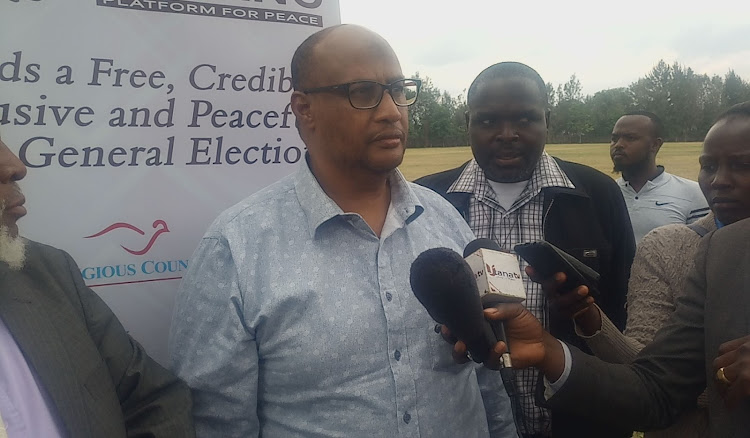 The Inter-Religious Council of Kenya is meeting different actors in Nakuru to do a situational analysis on peace in the county as election nears.

Nakuru county was declared a hotspot by the National Cohesion and Integration Commission as among the five counties likely to experience electoral-related violence.

Inter-Religious Council of Kenya and the Panel of Eminent Persons, also known as the National Peace and Mediation Team, is, therefore, meeting with different political actors to forge the way forward.

Inter-Religious Council of Kenya executive director Abdirahman Ismail  said the team will be interacting with different actors such as political parties, presidential candidates and citizens, among others.

"Nakuru is an important part of this country, it is a nexus of many factors and people working together and it has a history of sometimes being at the precipice during elections," Ismail said.

"We are here to promote peace ahead of the elections, but in the event of some of unexpected violence, both at the national and county level, the team desires to first preempt them and try to bring peace and mediation through an impartial method."

His sentiments are echoed by National Media Group chairman Wilfred Kiboro and a member of the eminent persons.

Kiboro also called on the media to do responsible journalism and exercise restraint when covering different political activities.

He also cautioned the scribes against being used by politicians to achieve their political goals, saying Kenya will be there even after the election.

In the women front, the council is represented by the chairperson Dr. Grace Ogile.

Ogile said the main aim of the team is to preach peace as well as capture cases against women before, during and after the election.

This will culminate into compiling a report that will form bases of coming with solutions to challenges women face during the polls.

“We have trained women monitors in almost all the counties and through their networks they have also trained other people," the chairperson said.

"So during the election time they will call us in case of any violence and we will act promptly in conjunction with police and other duty bearers to make sure that issue is sorted and documented.

They were speaking in Nakuru on Thursday.

Focus on your manifestos not rivals, Embu clergy tells politicians

They say exchange of words and name-calling is a threat to peace unity.
Counties
6 months ago