"I wish to inform Kenyans that the issue has been resolved," he said.

•The two said they have resolved issues that saw DCI boss George Kinoti and IEBC chair Chebukati engage in an online brawl of sorts.

•Chebukati said they have resolved the issue surrounding stickers adding that they are good to go in delivering a democratic election as required by the law. 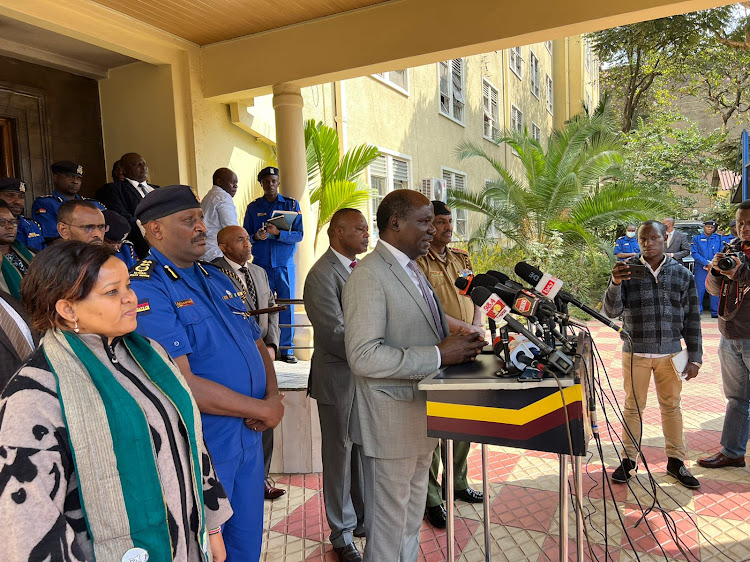 Inspector General of police Hillary Mutyambai and IEBC chair Wafula Chebukati have pledged to work together and deliver free, fair and credible elections.

In a press briefing held at the Jogoo House, Nairobi on Thursday, the two said they have resolved issues that saw DCI boss George Kinoti and IEBC chair Chebukati engage in an online brawl of sorts.

The IEBC chair said they have sorted the issue surrounding stickers adding that they are good to go in delivering a democratic election as required by the law.

"With regards to investigation revolving around election stickers recently imported into the country. I wish to inform Kenyans that the issue has been resolved," he said.

The truce comes after the National Police Service arrested three Venezuelans on grounds of suspicious dealings in relation to the August 9 polls.

One of the Venezuelans was nabbed with elections stickers of 10 counties at JKIA, raising eyebrows about their roles in the coming polls.

Mutyambai expressed commitment to ensuring the security of all stakeholders before, during and after elections is guaranteed.

He said the security personnel are under instructions to guarantee Kenyans their safety as they go out to cast their votes and that all and sundry go about their activities without fear of crime or harm.

“Formed police units under the National Police Service have also been deployed across the country to offer tactical support to general duty officers before, during, and after the general elections,” he said

He said the government has resourced the service adequately, especially with additional vehicles and operational equipment, to ensure seamless and continuous operations during and after the polls.

“Officers are well resources and in a high state of readiness to handle all forms of threats that may arise before, during, and after the general elections,” he told journalists at a press briefing in Nairobi.

Mutyambai further disclosed that the election security secretariat is conducting threat and risk analysis to identify threats to national security which in turn will inform resource deployment in real-time.

“Such emerging threats shall be tackled promptly. I, therefore, would like to warn those hell-bent upon acts of criminality and lawlessness to desist,” he said.

The IG said the service has established a national election security command centre to be manned on a 24-hour basis and is fully equipped to handle election-related security challenges.

Mutyambai formalised the process of election security preparations in September 2021 in a conference attended by Regional Police Commanders, Formation Commanders and County Commanders.

A manual outlining guideline for police commanders during the upcoming polls was launched in February 2022.

The manual states the principles of impartiality, equal treatment, accountability and rule of law by security agents and provides procedures for maintenance of public order during the election process and channels for use in lodging complaints against election security personnel.

It details the avenues for reporting election offences and is aimed at complementing the work of IEBC in ensuring free and fair polls.

Chebukati said they have secured the services of 150,000 police who will be deployed in 290 constituencies to ensure the safety of the electoral process.

He said there will be two officers per polling station.

"The police have been trained. The training has been done between the NPS and IEBC," Chebukati said.

Chebukati revealed the commission had received complaints of some people buying identity cards in some parts of the country.

He said he had shared the same with the police and they are investigating the claims.

“We appeal to Kenyans please don’t sell your IDs as they are important in ensuring you exercise your democratic rights.”

It is not clear which part of the country is experiencing voter buying claims. An ID is a mandatory requirement for one to vote.

All commissioners, the commission CEO Hussein Marjan and top police officers including DIG Noor Gabow and DCI George Kinoti were present during the three-hour meeting.

IEBC has ducked Kinoti concerns on integrity of the August 9 polls.
News
2 months ago