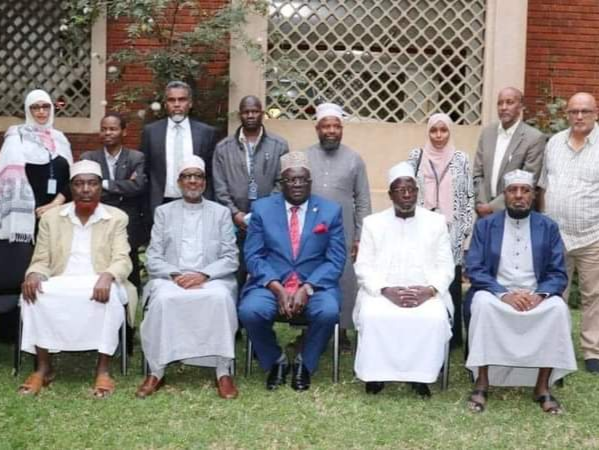 Education CS George Magoha has been under fire for the past week after a video of him making remarks perceived to be profiling Muslim women went viral.

The CS on Thursday bowed to pressure and apologised for the remarks.

According to a statement by NAMLEF Chairman Abdillahi Abdi, Magoha met the reporter together with the Muslim association and apologized.

"The CS apologized to the journalist and to us directly. His words were 'you judge me and am ready to accept your verdict','" Abdi said.

Abdi asked the Muslim community together with all other affected parties to accept Magoha's apology.

In the viral video, Magoha asked a female reporter covered in Hijab if she was representing al-Shabaab.

The journalist had asked him a question.

"Who are you representing, because if it's Al Shabaab I will not answer you...," Magoha said.

The Media Council on Wednesday demanded that the National Cohesion and Integration Commission compel Magoha to apologize for his alleged consistent intimidation of journalists.

The council said Magoha must be held to account to protect the dignity of reporters covering him and his ministry.

"The media council calls on the National Cohesion and Integration Commission to ensure the CS issues an unconditional apology, withdraws the unfortunate remarks, and rescinds his directive against the smooth operation of the media," the statement reads.

On Thursday, FIDA-Kenya threatened to file a petition to relevant the institution if Magoha refuses to resign over the comments.

Led by its chairperson Nancy Ikinu, FIDA states that the CS’s words were pure discrimination and a violation of human rights.

“CS Magoha’s utterances resulted in pure discrimination and a violation of human rights contrary to, and prohibited by Article 27 (4) of the Constitution,” she said.

Duale in a statement said Magoha was not respecting the leadership and Integrity Act.

Second phase of CBC classrooms to be completed before polls

Magoha said the second phase is not expected to go past August as long as everything goes to plan.
News
6 months ago