•He termed DCI findings as dishonest, saying that they are meant to destruct the IEBC from conducting free and fair elections.

•Mohammed also told the NTV that Smartmatic had sub-contracted him for the upcoming polls. 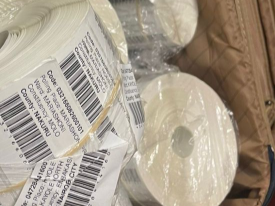 Some of the IEBC branded materials intercepted at the JKIA.
Image: COURTESY

Breaking his silence over the recent DCI-IEBC sticker scuffle, Mohamed told KTN News that the Directorate of Criminal Investigations was being partial in what they were releasing to the media.

He termed DCI findings as dishonest, saying that they are meant to destruct the IEBC from conducting free and fair elections.

The Seamless boss came to the limelight following last week’s arrest of three Venezuelans and the confiscation of the electoral materials at Jomo Kenyatta International Airport (JKIA).

Carmago was arrested on July 21, 2022 afternoon with 17 rolls of election stickers while Gustavo arrived in the country on July 15, 2022 with nine rolls of the same type of stickers and Suarez came with eight rolls on the same day.

Kinoti further said that Camargo confessed that he was given the materials from Panama by his company M/S Smartmatic International Holding B.V and that the material was destined for a private office in Nairobi.

“From the aforesaid invitation letters, it is clear that the three foreigners were in Kenya solely for business with Abdulahi Abdi Mohamed, applying for his personnel who he had contracted to come to his office in Nairobi for work-related activities. It is also clear that the said Camargo and his two counterparts were to report to Mohamed's office at Nairobi and not at IEBC offices,” he said.

But, in an interview with KTN News, Mohammed defended the three Venezuelans, saying that they are part of a team charged with the responsibility of training about ‘support solutions’ on behalf of Smartmatic International Holding.

He also rubbished claims that the three travelled using expired passports and claimed he is not an officer of IEBC but an agent of Smartmatic in Nairobi.

Mohammed also told the NTV that Smartmatic had sub-contracted him for the upcoming polls.

He also revealed that he recorded statements with the DCI but was surprised that the George Kinoti-led office was sharing partial information which has led him to become a person of interest.

“I recorded a statement with the DCI and gave all corresponding documents that pointed to the working relations between Smartmatic, IEBC and the Venezuelan nationals and Seamless Technologies,” he said as quoted by NTV.

“Having cooperated with the DCI, I am surprised that the DCI chose to share partial information with the public that has since turned me into a person of interest.”

DCI vs IEBC: What Kinoti said on arrest of Venezuelans