• Njiru's promotion and appointment comes after the retirement of Lieutenant General Walter Koipaton.

• Brigadier Fredrick Leuria was a promoted to Major General and appointed as an Assistance Chief of Defence Forces. 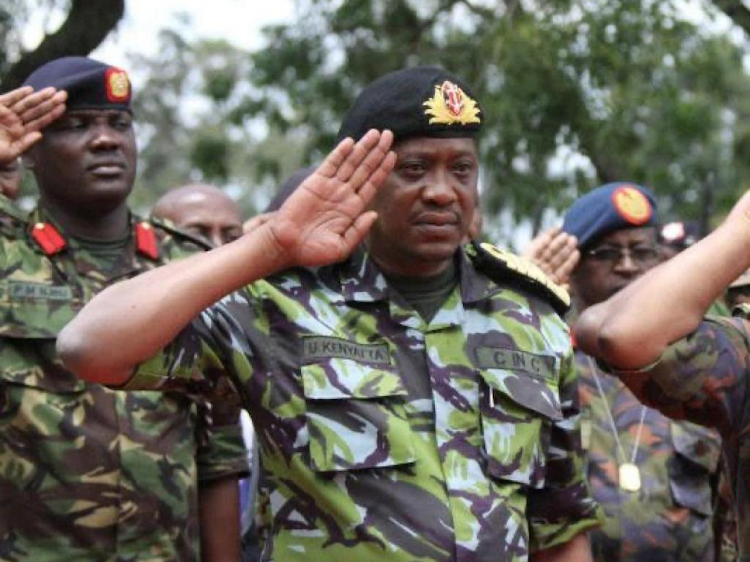 President Uhuru Kenyatta at a past military event
Image: FILE

Njiru's promotion and appointment come after the retirement of Lieutenant General Walter Koipaton.

Koipaton has served for four tours, after his appointment on July 13, 2018.

Mbogo has served as an Aide-de-Camp to both the late President Mwai Kibaki and Uhuru. He served Uhuru for four years.

The president announced the changes following a meeting by Board One in the military earlier on.

The board promoted five officers of the rank of brigadier to Maj General.

Maj Gen Juma Shee Mwinyikai was appointed the new Commander of East Command to replace Maj Gen Ayub Matiri who was in April named the Kenyan ambassador to Egypt.

Maj Gen Fredrick Leuria was named the assistant chief of defence forces in charge of operations, plans, doctrine and training.

Brig David Chesire was appointed commandant of eight brigades while the acting director of Asset Recovery Brig Alice Mate was also promoted and will remain in the legal branch at defence headquarters.

A statement from the department of defence said there were more changes across the military as per the defence council.

The changes still leave room for speculations on who the possible next Chief of Defence Forces.

The fact that the current Vice of Chief of Defence Forces Lt Gen Francis Ogolla was not touched he still remains a possible candidate for the position.

The other candidate is Lt Gen Mohamed Badi of the Nairobi Metropolitan Service.

The next CDF is likely to be from the Kenya Airforce. If any, Kenya Airforce commander Maj Gen John Omenda has to be promoted to the rank of Lt Gen for him to be in the line of succeeding Gen Robert Kibochi whose term will end next year. Under the rules introduced by retired Chief of General Staff Gen Daudi Tonje — adopted and known as the Tonje Rules — the position of the CDF is rotated among the three services.

These are Kenya Army, Kenya Air Force and Kenya Navy.

This means that the next CDF must come from the Kenya Air Force.

Both Ogolla and Badi are Air Force veterans and now the senior most officers with the title Lieutenant General.

In the military, you don’t skip ranks.

Lt Gen Njiru will now join the Assumption of the Office of the President Committee to manage the succession of president Kenyatta.

Apart from Omenda, the other service commanders are Kenya Army Commander Lt Gen Njiru and Kenya Navy Commander Maj Gen Jimson Mutai Apart from the CDF, other members of the Assumption of the Office of the President Committee are the Director of NIS, PS Interior, Inspector General of Police, the Attorney General, State House Comptroller as well as PSs for Foreign Affairs, Finance and ICT.

Others are two clerks of the bicameral Parliament and the Chief Registrar of the Judiciary.

The team is chaired by the Secretary of the Cabinet.

Part of the mandate of the committee is to organise for the security of the president-elect.

The Kenya Defence Forces Act says a CDF, his deputy and service commanders shall serve a single term of four years or retire upon attaining the mandatory retirement age.

The Act also says the president may, on the recommendation of the National Defence Council, which is also known as Board One, extend the CDF’s term for not more than one year in times of war or emergencies, such as political uncertainty.

However, the law contains a clause about generals: "The maximum retirement age shall be amended from time to time through legislation on the recommendation by the Defence Council.

He says it has been equipped to the best levels to transform it into a modern force.
News - Page 6
5 months ago