Matiang’i sends more security personnel to Coast ahead of polls

The police station will provide a dedicated space for the ATPU to work on terrorism cases.

• The CS who was speaking after chairing a meeting of the Coast region security chiefs in Mombasa said the additional officers and more equipment are expected on the ground beginning next week. 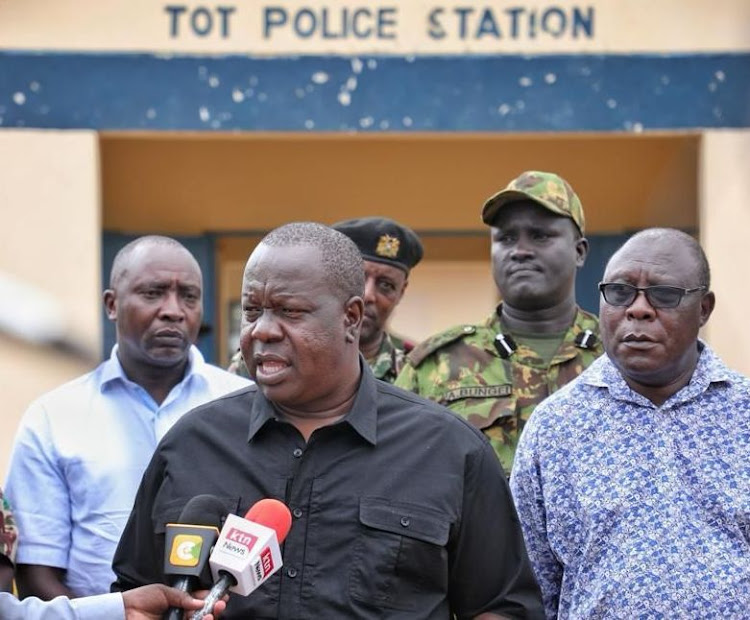 Interior Cabinet Secretary Fred Matiang’i has directed more police officers to be deployed to the Coast region to heighten security ahead of next month’s general election.

He said intelligence reports had flagged out politically-linked mobilization of gangs and other illegal groupings that could pose a security threat in at least two counties in the region.

The CS who was speaking after chairing a meeting of the Coast region security chiefs in Mombasa said the additional officers and more equipment are expected on the ground beginning next week.

“I have asked the regional security teams to raise up the level of security alertness to ensure that we facilitate effective participation in the general election.”

“We are bringing up special additional resources to back up their work and planning,” he said.

He said the government is determined to ensure that peace will prevail in a region that has a history of election-related unrest and that it will crackdown on illegal gangs and the politicians sponsoring them.

“We have players in two counties that may be tempted to amass small groups that could engage in crime. My simple advice to them is not to try because we’re watching closely. I’ve asked the security team to act very decisively on any individual politician who tries to do that kind of a thing.”

The CS who also officially opened the new Coast Region office complex for crime and counter-terrorism investigation teams said the government will respect the rights of terror suspects under the ‘Mandela Rules’ even as it invests in more specialised crime facilities.

“We will respect the human rights of all suspects including terror suspects. Those held will be treated within the framework of human rights within our constitution and all the international conventions that we have signed as a country.”

The British High Commissioner, Jane Marriott, was also present during the opening ceremony for the Sh81 million first Anti-Terrorism Police Unit (ATPU) regional Headquarters and Mombasa Police Station which was funded by the British government.

“Defeating terrorism is a key priority in the UK-Kenya security partnership and today’s opening marks a key milestone in our joint efforts,” the High Commissioner said.

The complex with 26 rooms will provide a dedicated space for the ATPU to work on terrorism cases.

It will also allow the public to interact with the ATPU in a deliberate effort to create public awareness about its work and strengthen its relationship with the local community.

The building design has paid particular attention to compliance with human Human rights requirements such as the Mandela Rules and includes a secure detention facility with separate cells and private ablution amenities for men, women and children.

The ceremony was also attended by the Inspector General of Police Hilary Mutyambai, regional police chiefs and representatives from the United Nations Office of Drug and Crime (UNODC).

The police station will provide a dedicated space for the ATPU to work on terrorism cases.

It will also allow direct access to the ATPU for the public, creating more awareness about the ATPU’s work and strengthening its relationship with the local community.

Human rights compliance and international standards such as the Mandela Rules have been at the heart of the building’s design.

The station includes a secure detention facility with separate cells and private ablution amenities for men, women and children. Marriott said it is a testament to the UK and Kenya’s shared commitment to the rule of law and international human rights.

“Kenya is the UK’s premier security partner in East Africa. A primary focus of this partnership is to strengthen counter-terrorism capacity within the criminal justice system, in line with international human rights standards.

"The UK works with stakeholders across the criminal justice pathway, including investigators, detention supervisors, prosecutors and judiciary, all of whom are key to preventing and disrupting terrorist activity.”

She said terrorism is one of the biggest threats facing our countries.

Matiangi added Kenya applauds the UK-Kenya Security Compact agreed in 2018 and the incorporation of the UK Kenya Strategic Partnership 2020- 2025, through which the British High Commission (BHC) has worked with the Government of Kenya to establish this modern, purpose-built police station with detention facilities for ATPU Coast in Mombasa.

According to the Statista Research Department (February 2022) report, the total number of terrorist-related fatalities worldwide in 2020 was 29,389.

He added the country continues to face the problem of radicalization of our most vulnerable youth as well as attacks of lone wolfs and in the recent past grenades were being thrown in public places and in public transport vehicles.

“Our people, as well as our security forces, have fallen victim to the destructive nature of Improvised Explosive Devices (IEDs) on our roads in Northern Kenya,” he said.

The CS said the narrative shows how it has become necessary for the country to invest heavily in modern anti-terrorism and counter-terrorism efforts through bilateral, multilateral and global cooperation and partnerships.

He said the government has strengthened the country’s capacity to effectively prevent, investigate and prosecute terrorism, counter-terrorism financing and money laundering through legislation, institutions, and partnerships.

Ali Elius, 26, had been in Baure, Boni Forest, for training in readiness to attack a police station.
News
4 months ago

We will have smooth transition of power, Matiang’i tells donors