Raila said he is aware that rising cost of living has become a major problem to Kenyans.

• The Azimio team was on the first day of its two-day campaign blitz in Nairobi county. 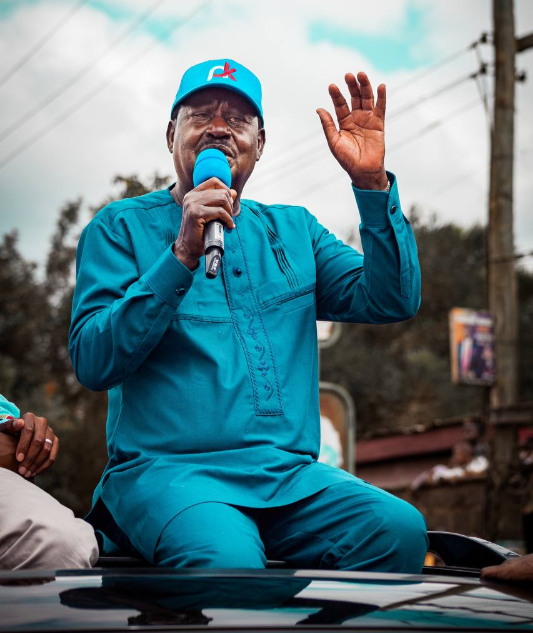 Speaking on Saturday during a series of rallies within the city, Raila said he is aware that rising cost of living has become a major problem to Kenyans but he has a grand plan to reverse the sorry state of affairs.

The Azimio team was on the first day of its two-day campaign blitz in Nairobi county.

They had several stops including at Dagoretti Market and Satellite Shopping Centre, Stage Two and 56 and Mau Mau and Kangemi.

The team also visited Starehe in Nairobi Southward and Landi Mawe, Kamukunji and at the Tumaini Grounds in Embakasi West.

Karua said the solution to the rising cost of living lies in electing leaders with integrity who would in turn take good care of public funds.

"We must take good care of public funds to be able to help you. When few embezzle your funds and come disguised as frineds to share a portion with you, we won't be able to give you good service," Karua said.

Under the Azimio manifesto, Raila has pledged to give every household Sh6,000 monthly stipend to cushion them against economic hardship should he win the August election.

The ODM leader faces stiff competition from UDA presidential candidate William Ruto even as recent opinion polls have given Raila an edge over the Deputy President.

Says importers will have a free hand to choose their preferred mode of transport for their cargo.
News
2 months ago

Ruto: Raila failed as prime minister, has no plan for Kenya