Ruto lacks numbers, I will defeat him — Raila

Says signs are clear that Azimio will form the government.

•He said that he was equally sure of bagging the Coast region vote,  rejecting claims of mixed signals from his traditional support bases.

•Raila urged the region not to be swayed by latecomers who are keen on derailing them from benefiting from his presidency when it has become more imminent than before. 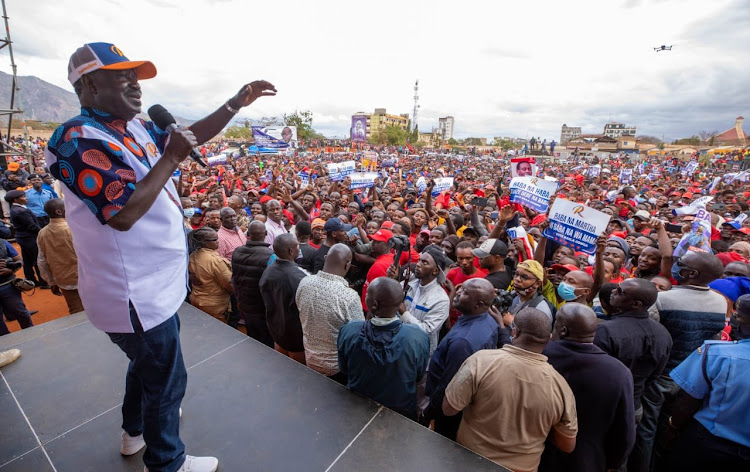 Azimio la Umoja presidential candidate Raila Odinga has exuded confidence he will defeat DP William Ruto in the August 9 race in round one.

Speaking in Kwale while on a campaign tour on Wednesday, the former Prime Minister said Ruto has no numbers to upset his fifth stab at the presidency.

Raila said it was only a matter of days [25] for his side to win.

The Azimio leader urged Coast voters to reject Ruto, saying there was no way the Deputy President alone can defeat him considering how close the 2013 and 2017 polls in which he finished second were.

“Our competitor (Ruto) is now saying that Raila is scared and has sensed defeat. Can he defeat me? Can he manage alone if they couldn’t do it when they were with Uhuru? He cannot,” Raila said.

While in Tongaren on Monday, Ruto dismissed as doctored, and therefore fake, opinion polls which for weeks have him trailing Raila.

“They should stop disturbing us with fake opinion polls. Kenyans will decide the leadership they want,” the DP said.

But Raila said signs were clear Azimio will form the government.

“They are just making noise but they have no people behind them. We have toured the whole country and Kenyans have decided it is Azimio,” Raila said.

He said that he was equally sure of bagging the Coast region vote,  rejecting claims of mixed signals from his traditional support bases.

Raila urged the region not to be swayed by latecomers who are keen on derailing them from benefiting from his presidency when it has become more imminent than before.

“You have voted for me all these years. It is our time now. I want to urge the youth and women not to sleep on voting day. A vote that is not cast will be in favour of our opponents,” the Azimio leader said.

He promised to improve roads and water supply in the region.

We are telling him not to cause chaos. Let him accept and let it be settled. Can Ruto defeat Raila? He doesn’t know have that kind of vote

Raila tore into Ruto’s team as one that cannot be trusted with intervening on the delicate issues affecting Kenyans including the soaring cost of living.

“The difference between us and the other group (Kenya Kwanza) is like day and night.  Their work is to just talk. They are not trustworthy. All they say are lies. Ruto has no truth in all he says,” Raila said.

He also made stops in Matuga and Lunga Lunga in the vote hunt.

Kwale has been perceived as gravitating towards Ruto with the influence of Governor Salim Mvurya.

“They are all cooked, I have a problem with the integrity of opinion polls in Kenya,” Kuria said.

“Some people interfere with the polls to give the wrong impression to citizens,” Nyoro said.

Leaders accompanying Raila said Ruto's sentiments and those of his team were of people who are laying ground to reject election results.

Junet said the DP was preparing to reject the election results, defending pollsters as arriving at their figures through science.

“Opinion polls are done scientifically by professionals. Three pollsters have said Raila will win. He has refused to accept the results. Why didn’t you [Ruto] respond when polls were favouring you?” the MP asked.

“We are telling him not to cause chaos. Let him accept and let it be settled. Can Ruto defeat Raila? He doesn’t know have that kind of vote.

Junet said his vote has never been tested.

“He cannot be compared with Raila who has been hunting votes for 25 years. He should know that this is gone with Raila,” he said.

Karua asked residents to vet the leaders they are electing to various offices saying people should check the track record of those they give jobs.

“Our rivals are coming with sweet words. It is easy to speak but let us check people in terms of their character and records. If someone cannot do anything when serving in government, they will not remember you,” she said.

She also took issue with Ruto’s verbal attacks targeting Defence CS Eugene Wamalwa saying it spoke a lot about the DP’s personality as a man who disrespects his colleagues.

“If he has no respect for fellow Cabinet members, who are rich as you, and disrespecting your boss, can you respect Kenyans? Be cautious as they will step on you if you give them power,” Karua said.

“The other person is bitter and angry. If he is not insulting Raila, he is insulting women. Let him pack and go once defeated and go back to Sugoi. Let him start packing and stop showing us the anger,” Ngilu said.

Joho said they cannot abandon ODM after the long time they have fought for the party.

He said Raila would lead the way first. Ruto is a liar who cannot be entrusted and Kinango is an ODM base.

“We must differentiate the two teams. If we want a real change, let us vote for Raila and Martha. If someone has been DP for 10 years and has not solved problems here, how will he do it this time?” Wandayi said.

They asked the residents to reject Ruto accusing him of disrespecting women following his brawl with Eugene.