More than 18 million people are food insecure due to drought, and more than seven million children face acute malnutrition

• Uhuru says the Horn has faced a desert locust invasion, the ongoing drought, threats related to violent extremism and armed conflict and the Covid-19 pandemic 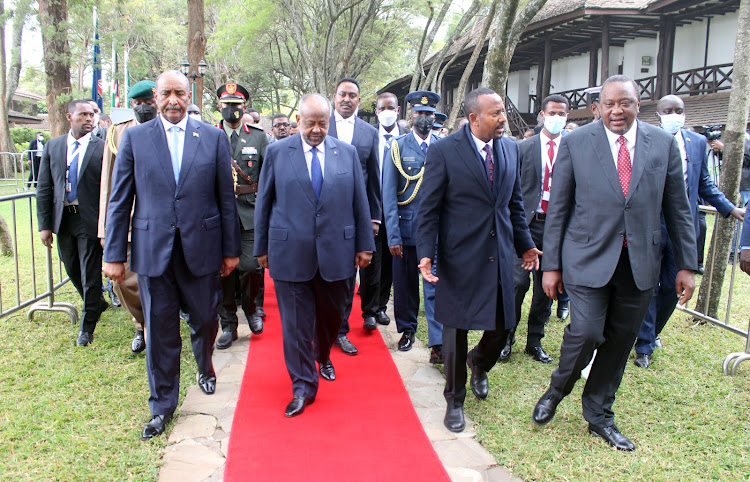 The ongoing drought in the Horn of Africa risks raising tensions that could trigger new conflicts, President Uhuru Kenyatta has warned.

Speaking during the 39th Extraordinary Igad Heads of State and Government Summit in Nairobi on Tuesday, President Kenyatta said there is a need to manage the drought before it becomes a threat multiplier.

“The drought, the worst in 40 years, has intensified food insecurity, dried up water resources, and forced displacement of people raising tensions that could trigger new conflicts,” President Kenyatta said.

Uhuru said the Horn of Africa has faced various challenges, adding that in the past two years alone, it has had to deal with a desert locust invasion, the ongoing drought, threats related to violent extremism and armed conflict, Covid-19 pandemic and the effects of the Russia-Ukraine war.

“As leaders, it is incumbent upon us to work together and to do so boldly and creatively to navigate the multiple crises we face, seize opportunities as they emerge, and define the path of peace and sustainable economic development,” the President said.

Due to limited food, pasture and water, there is a historical pattern of pastoral communities fighting for the available resources in Southern parts of Ethiopia, Northern Kenya, Somalia and Sudan.

United Nations Office for the Coordination of Humanitarian Affairs on June 27 said more than 18 million people are food insecure due to drought, and more than seven million children face acute malnutrition.

In its report, OCHA said acute food insecurity continues to rise in Ethiopia, Kenya and Somalia and attributed it to “an exceptionally persistent and severe drought”.

The situation, it said, increases the risk of starvation in the region and the potential for famine in Somalia.

In April, the EU Commission said the drought situation has been worsened by Covid-19 impacts, conflict and insecurity in the region, as well as the expected aggravation of food insecurity and nutrition due to Russia's invasion of Ukraine.

However, President Kenyatta said despite the challenges, the people of the Horn of Africa are determined to forge ahead, to build a better future for themselves and the next generations.

“It is also worth noting that the picture is not totally bleak. We have recently celebrated the peaceful transition of power in Somalia. And in regards to some of the conflicts that have rocked our region, we see a commitment to a peaceful transition,” he said.

There are proposed talks between Ethiopia federal government and Tigray, while there is some movement in the South Sudan peace process, albeit delayed to meet the February 2023 deadline.

In Sudan, after days of protests, General Abdel Fattah al-Burhan on Monday said the army will withdraw from ongoing political talks and allow political and revolutionary groups to form a civilian transitional government.

In the communique released after closed-door meeting, the summit also expressed alarm over the “serious drought situation" in the region.

It resolved that member states will respond jointly to develop permanent solutions to the food insecurity problem in the region.

The leaders said the humanitarian and health situation in the region has further been compounded by shortage of food supplies caused by the conflict in Ukraine, Covid-19 and heavy flooding in parts of the region.

They called on international donors to “urgently scale up” humanitarian assistance and recommit resources in the health sector.

Speaking to the Star on the sidelines of the summit, Agriculture Cabinet Secretary Peter Munya said if member states assemble resources as a region and come up with regional programmes, then there will be an impact in curbing the recurrent droughts.

“We already have a programme we are running, especially in the livestock sector that has been approved at the Igad level and being implemented in all Igad countries for food security.

“The programme supports the livestock sector so that we don’t have small initiatives in each country but a regional approach towards regional challenges,” Munya said.

During the Summit, Igad chairman Al-Burhan gifted and decorated President Kenyatta for his diplomatic role in regional peace efforts.

IGAD summit on peace and security gets underway in Nairobi

The 39th extraordinary assembly will focus on conflict, terrorism and violent extremism.
News
2 months ago

October to December 2022 short rains season will also be below average.
News
4 months ago