I've not told you to support me; It's me vs Raila - Ruto hits back at Uhuru

Uhuru lashed out at his deputy accusing him of making empty promises.

•The DP urged the President to leave the battleground as he is not competing against him.

•He reminded his boss that the contest is between him and ODM leader Raila Odinga. 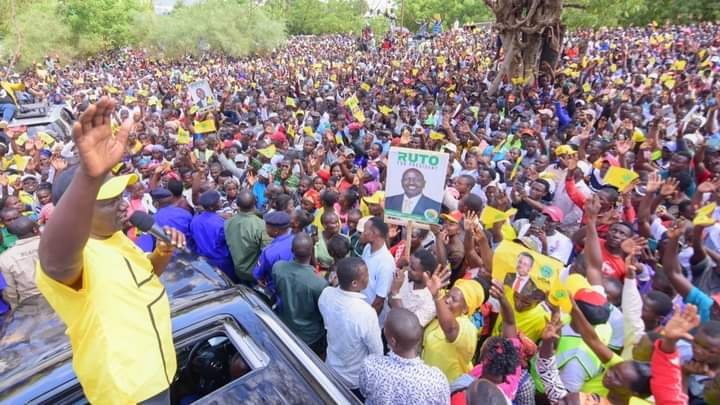 Deputy President William Ruto has fired back at his boss Uhuru Kenyatta just minutes after he told him off for "failing to deliver on his mandate".

Speaking in Chuka town, in Tharaka Nithi County, the DP urged the President to leave the battleground as he is not seeking the presidency.

He reminded his boss that the contest is between him and ODM leader Raila Odinga.

Ruto told off the President saying he has not asked him for support adding that he is ready to face Raila head-on and defeat him on August 9.

"And I have not told Uhuru Kenyatta to support me, let him keep off. I am ready to defeat Raila very early in the morning."

The remarks by the DP came after Uhuru accused him of making empty promises yet he had the time to deliver what he is promising Kenyans.

Uhuru said the DP had a whole 8 years to implement most of the development pledges he is issuing now but he could not.

Loosely translates to: " I am saddened to see some people talking out there. Someone has been given a job instead of doing it he is just making empty talks. Then the same person starts saying he will do this and that".

"Why didn't you do that when you had the opportunity. People should stop such rubbish... This issue of making too much noise here and there should stop. CS Munya here has delivered a lot in the three years he has served. What have those people done for the 8 years?"

Led by his running mate Rigathi Gachagua, the group said the President elbowed the DP out of the government and focused on his Handshake deal with Raila.

"Mr President, you seem to have a short memory. You chased William Ruto from the government four years ago. You chose Raila as your chief adviser and CS Fred Matiang'i as the implementor of your projects," Rigathi said.

"When you chased away Ruto, you abandoned the big four agenda and you focused on the BBI. Now the country has come to a standstill."

The UDA  deputy party leader went on to ask the President to clear the way for Ruto saying he is ready to serve the people of Kenya.

Ruto: Why I am running for President