Ruto to give billions to 'hustlers' in bold manifesto 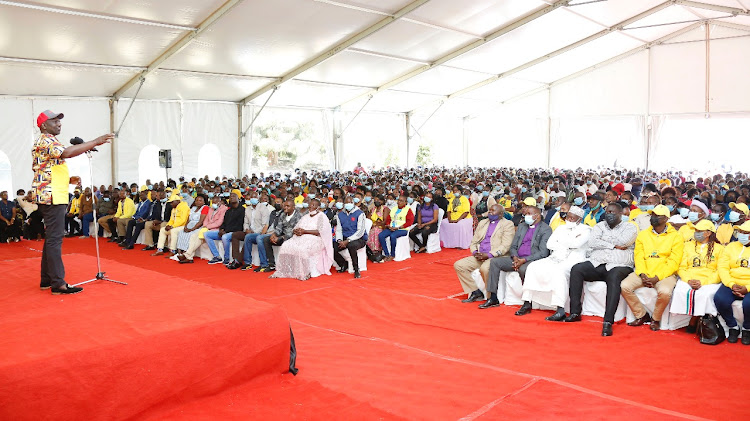 DP William Ruto has unveiled an ambitious manifesto that allocates billions to “hustlers”, anchoring what he calls the most realistic model to end Kenya's economic crisis.

The Deputy President's economic blueprint emphasises empowering the economically underprivileged through what he calls the bottom-up economic model.

Ruto said mega projects such as the standard gauge railway, the Nairobi Expressway and dams have very little multiplier effect on the economy.

In the document launched at Kasarani Stadium, the DP said manufacturing is inordinately capital-intensive and not sufficiently job creating.

“We have recently inaugurated a firearms factory that cost Sh4 billion and celebrated the fact that it will create 100 or so jobs," Ruto said.

"This works out to an investment of Sh40 million per job," he said, criticising the project initiated by President Uhuru Kenyatta.

“In the same country, the county government of Kitui established a garment factory with a capacity for 600 jobs at a cost of Sh168 million, Sh280,000 per job.

"The Sh4 billion gun factory investment is the equivalent of 24 Kitui garment factories and 14,000 jobs.”

It has been known for at least four decades, Ruto said, that Kenya's economic model is fatally flawed.

“The question is why we have stayed on this path. Why the government did not heed its own clarion call to restructure the economy? Why we would choose to manufacture guns rather than garments?” the presidential candidate asked.

In agriculture, which he described as the foundation of the economy, the DP promised to progressively inject Sh250 billion in the next five years.

This is meant to improve food security by providing capital to farmers and deploying modern risk management instruments to make agriculture productive.

“We commit to revamping underperforming or collapsed export crops, while expanding emerging ones such as coffee and boost the tea value chain,” he said in the manifesto.

“We will establish MSME business development centres in every ward, and an industrial park and business incubation centre in every TVET institution,” the document states.

Ruto’s government will enact a right-to-work law to make trade licensing and providing trading locations an entitlement of every citizen who applies.

Kenya Kwanza will review and rationalise all business licences, cap total licence fees  at 1.5 per cent of turnover.

It will also enact an administrative burden law that no business spends more than four person-hours a month on tax and regulatory compliance.

“We will work with county governments to provide one street trading premise per 50 urban residents, with a view to increasing the average daily income of informal traders by Sh200,” he said.

In housing, the DP said his administration will establish a settlement fund similar to acquiring land from settler farmers after Independence.

This move is an attempt to fix the problem of landlessness at the Coast and other parts of the country.

Kenya Kwanza, Ruto said, will also deliver 250,000 housing units per year and increase the number of mortgages from 30,000 to one million. This will be achieved by enabling low-cost mortgages of Sh10,000 and below.

Ruto said his administration will turn around the manufacturing sector by establishing factories in various parts of the country to spur economic growth.

Kenya Kwanza, he said, will set up leather industries in Athi River, Narok, Isiolo, and Wajir and secure linkages with technical support from overseas markets.

Ruto said his administration will aim to make Kenya a leading exporter of building products such as iron sheets (mabati) and building steel to her neighbours.

His government, the DP explained, will also leverage on UHC and human capital to scale up the manufacturing of essential medical commodities.

He promised to build a regional pharmaceutical hub in Kenya.

Ruto’s administration plans to establish garment and textile industries, aiming to become the leading exporter in the region.

“The Kenya Kwanza government will work with the apparel export industry to develop a viable cotton raw material supply chain,” he said in the document.

Ruto has promised to establish a fund for chronic diseases such as cancer, enrol every Kenyan in health insurance cover and set up drug manufacturing firms.

In his manifesto, the DP said the fund will also cover catastrophic illness and injury costs not covered by insurance. It will be funded by a combination of insurance levies and the government.

The Kenya Kwanza administration, Ruto pledged, will introduce a raft of reforms to NHIF and revise contributions to net Sh200 billion to cover all Kenyans.

“Our preliminary analysis shows that a progressive contribution system can achieve the Sh200 billion requirement with contributions ranging from Sh300 to Sh3,000 per household per month,” he said.

His government will also arbitrate to end the incessant fights between medical workers and county governments, give stipends to community health workers and roll out technology enabling Kenyans to control their health records.

“We will delink financing of primary health care from public facilities by establishing stakeholder managed Primary Health Care (PHC) Funds as strategic purchasers at each Level 4 facility,” he said.

On education, Ruto committed to bridge the current teacher shortage of 116,000 within two financial years and pay for in-service teacher training.

The Kenya Kwanza candidate promised to review the current exam-based system of academic progression, which he blamed for excluding millions of learners based on basic education level exit exams.

“Kenya Kwanza's administration will establish a Special Service Tariff for all learning institutions to cater for basic utilities such as water, electricity and internet connection,” he pledged.

On infrastructure, Ruto said roads are arguably the country’s most important system of public works.

He said one-third of the country’s 63,575km of classified roads is in need of rehabilitation or reconstruction.

The DP committed to completing all roads under construction and prioritise upgrading. He promised to maintain rural access roads and improve infrastructure in urban informal settlements and regional trunks that have the highest immediate economic impact.

Ruto further promised to end “state capture” by establishing, within 30 days, a quasi-judicial public inquiry to unravel the extent of cronyism  and make recommendations.

Kenya Kwanza intends to end all forms of extra-judicial executions by security services, he said, and amend the National Coroners Service Act of 2017 to establish the Coroner General’s Office.

Ruto further promised to entrench the independence of the Judiciary by implementing the Judiciary Fund. He pledged to grant financial independence to the Ethics and Anti-Corruption Commission and the police to prevent their reliance the Office of the President.

On social protection programmes, Ruto said NSSF payroll deduction system is “not fit for purpose” in an economy where 85 per cent of workforce are not in formal employment.

The DP further said 26 per cent of children under five years of age (1.5 million children) are chronically malnourished, a problem he promised to reverse in five years.

He said about 1.8 million people above age 65 grapple with lack of income security, inadequate health services, lack of employment and a deteriorating environment.

Ruto committed to achieve 100 per cent NHIF coverage for senior citizens within three years and revamp the cash transfer programmes for elderly and vulnerable households.

People with Disability have also been promised 100 per cent NHIF coverage within 18 months.

The Kenya Kwanza candidate committed to increase capitation of pupils with disabilities by 50 per cent and set aside 15 per cent of all public-funded bursaries for them.

The manifesto also promises a contributory benevolent fund for families of fallen and terminal ill security officer. It will cover serious mental illness.

Kenya Kwanza has pledged to harmonise affordable housing mortgages, similar to those of the Judiciary and Parliament.

“Within the first 100 days, the Kenya Kwanza administration will commission a review that will consider improvement of remuneration and terms of service for all officers in the security sector to be commensurate with the cost of living," the manifesto reads.

Ruto said the participation of women in the key sectors of the economy is minimal, and the vast majority remain in low-income jobs and endure poor working conditions.

He pledged to realise the the two-thirds gender rule in elective and appointive positions in the public sector, within 12 months of election. Ruto also pledged to allocate half the Cabinet positions to women.

This move will protect women and children from dispossession of family property.

"The current IG is the president of Kenya, who is the leader of Azimio," Ruto said.
News
3 months ago