The authority says bhang is a controlled substance whose commercial trade remains prohibited.

• The authority said member states including Kenya rejected a 2019 recommendation by WHO to permit the use of cannabis-based products for recreational purposes. 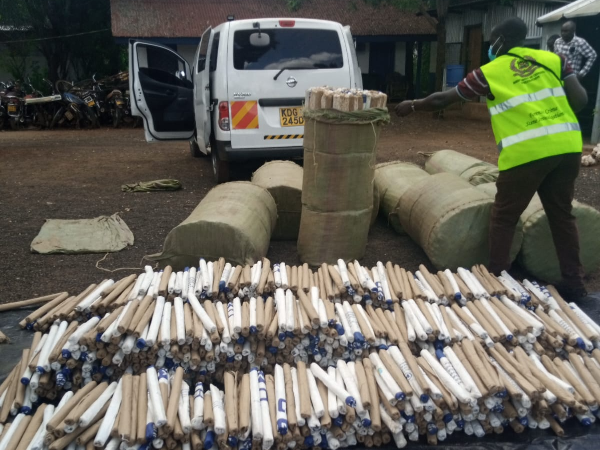 The National Authority for the Campaign Against Alcohol and Drug Abuse has weighed in on the ongoing calls for bhang legalisation.

"Let be known that the law is still in force and that anyone contravening this law i.e being in possession or trading in cannabis will be apprehended," the authority said in a statement.

Roots Party presidential candidate George Wajackoyah has stated in his manifesto that he will legalise the use of marijuana in the country for commercial purposes should he be elected president on August 9.

The professor argues that proceeds from the mass plantation of marijuana would be used to pay off Kenya's debt.

"Let's face reality, marijuana by-products are very resourceful. We can derive medicinal purposes, soap production and many others," Wajackoyah said when he first spoke about legalising bhang five months ago.

On Thursday night while launching his manifesto, the professor of law said if we grew cannabis in Nyeri county alone, Kenya would have 10 per cent of IMF total cash reserves.

"In short, we will never have to borrow a single coin in future," he said.

Wajackoyah has cited examples of countries that have legalised the use of the substance to push the bhang agenda during his campaigns.

But Nacada dismissed his philosophy as misleading and sought to set the record straight and highlighted details on the control measures on cannabis use.

"It is noted that some of the statements made in favour of legalisation are misleading as they are intended to elicit excitements amongst the people, especially the youth," Nacada said.

The authority said UN member states adopted the 1961 Single Convention and designated cannabis as containing the most dangerous and addictive substances that produce the most harm to humans.

"Though the convention classified cannabis in Schedule I as having potential for abuse and harm, still provided for its use for medical and scientific purposes," Nacada said.

The authority said member states including Kenya rejected a 2019 recommendation by WHO to permit the use of cannabis-based products for recreational purposes.

In effect, Nacada noted that cannabis is still under international control with access granted only under certain conditions.

The purpose for access must be legitimate and is only limited to medical and scientific purposes only.

One must also seek and submit government authorization for transactions on cannabis.

He must also keep all trade and use records and file returns with the pharmacy and Poisons Board which will in turn report to the International Narcotic Control Board (INCB).

For individual access to cannabis-based medication, an individual must submit an authentic prescription from a licensed doctor.

The authority also said the volume of cannabis traded must not exceed the quota allocated to the particular country by the INCB.

This means that even if Wajackoyah were to legalise bhang, it wouldn't be commercially viable because of the quota restriction even though cannabis remains the drug of choice amongst narcotic users.

Data from a national survey conducted in 2017 showed that at least 1 per cent of the country’s population aged between 15-65 years are current users of cannabis.

The drug has also infiltrated learning institutions with current data showing that 7.5 per cent of high school students and 1.2 per cent of primary school pupils have ever used it.

Some of the negative effects on the health of cannabis users include vulnerability to addiction, respiratory diseases and lung cancer, cardiovascular conditions such as stroke,  mental illnesses, impaired psychomotor skills and cognitive functions.

Wajackoyah manifesto: How Kenya will be rich from weed, snakes

He says with the legalisation of bhang, one can earn $78,000 or Sh8 million per harvest.
News
1 month ago

The police asked Kenyans to desist from redistributing the video.
News
1 month ago
WATCH: The latest videos from the Star
by EMMANUEL WANJALA Radio, Print & Digital Reporter
News
01 July 2022 - 20:00