IEBC said they will use electronic voter register only.

•In a scenario where the biometric identification fails,  the officers will go through the Kenya Integrated Election Management System (KIEMS) using the ID number, which will retrieve the voter information for identification.

•According to IEBC CEO Marjan Hussein, the manual voter register is prone to abuse in the voting process, the reason it will not be used in the 2022 General Elections. 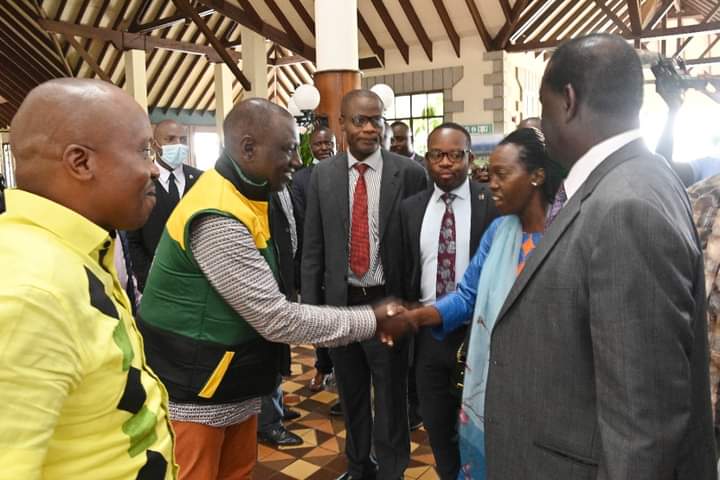 IEBC said they will not provide hard copy voter registers to polling stations and insisted on using the electronic system.

While the ODM leader said there was a need for use of both electronic and manual voter registers in the coming polls, the DP appeared to back the IEBC plot to stick to electronic voter register only.

Raila in his presentation wanted to know why IEBC was reluctant to use manual voter register.

His lawyer Paul Mwangi argued that this was against the Elections Act.

He said that the law requires the commission to have the manual voter register as a secondary voter identification system in the event that the electronic system fails.

"The insistence is not that you don't use technology. Use all the systems that have been described but the law requires you to have that system in place whether it will be used or not," Mwangi said.

The DP on his part the Kenya Kwanza coalition has no qualms with the use of the electronic register so long as its security is guaranteed.

"There have been reports that Kenya Kwanza wants a manual register. We don't want a manual register. If you give us sufficient safeguards that an electronic one will function without any chance of failure then we are good," Ruto said.

The Kenya Kwanza presidential candidate said the use of digital equipment in conducting the polls is the way in a modern democracy.

UDA secretary-general Veronicah Maina was in the view that the manual voter register could pave way for manipulation by having people vote twice.

"As a result, we have many unregistered voters entering the (polling) stations, accessing ballot papers and voting by avoiding or circumventing the KIEMS kit," Maina added.

The Independent Electoral and Boundaries Commission (IEBC) revealed that it will adopt a fully biometric voting system in the August 9, General Election.

In a scenario where the biometric identification fails,  the officers will go through the Kenya Integrated Election Management System (KIEMS) using the ID number, which will retrieve the voter information for identification.

"KIEMS Kits works offline in terms of identification, it works through backup. This information will be resident in the SD card and if there is a malfunction the SD card can be put in a backup kit," he said.

The information will include the voter's fingerprints, which will then give the polling clerk an opportunity to redo the fingerprint identification to confirm the identity of the voter.

IEBC argued that the manual register method is prone to abuse saying when voters are identified through technology, the system automatically archives the details of those who have voted to mean that if that person presents himself again, then that person cannot be able to vote (again).

Key issues raised by Raila in meeting with IEBC

IEBC said it will respond next week to the issues.
News
7 months ago