Ruto lauds Raila for committing to to accept poll outcome

He said Kenyans must be assured of their peace after the election.

•Ruto said he was happy that Odinga has agreed to accept defeat if he loses in the August 9 poll.

•He said Kenyans must be assured of their peacefulness after the election.

Kenya Kwanza Alliance leader William Ruto thanks Azimio La Umoja's Raila Odinga for accepting to concede if he loses in the August elections. 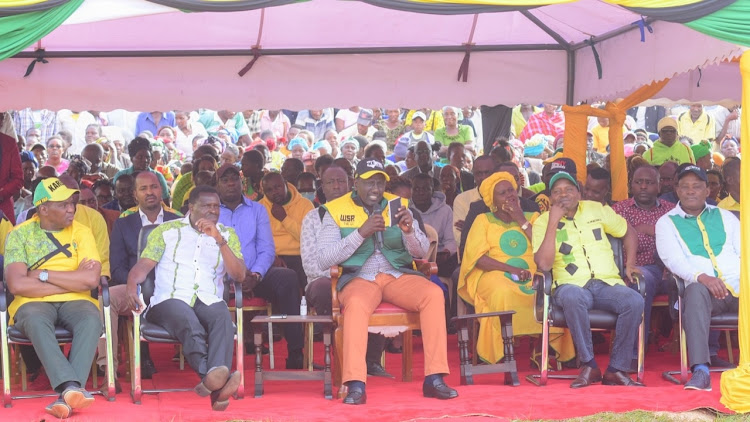 Deputy President William Ruto has said he is now confident the August 9 general election will be peaceful.

Ruto said since his rival Raila Odinga has publicly agreed to accept the outcome of the election if defeated, he is happy Kenyans can now be assured of their peacefulness after the election.

Noting he has also declared the same, Ruto called on other candidates for various seats to emulate it.

He said as Kenyans go into the election to make their decisions, it was imperative for all leaders to assure them of their continuous tranquillity after the process by accepting their will.

“For the first time, I want to I want to congratulate my competitor for accepting and for committing that he will respect the outcome of the election and that he will concede defeat and go home when he loses,” Ruto in a meeting in Tharaka Nithi.

“Kenyans must be assured of their safety and this is the democracy that we want to have and Kenya we want to build.”

During a Tuesday interview televised on local TV stations, Odinga who was with his running mate Martha Karua had been challenged by one of the interviewers to state if he is going to accept the poll result if he loses.

Ruto has in several instances asked Raila to declare his stand claiming he has never accepted poll results despite being defeated.

The Deputy President made the remarks during a Kenya Kwanza economic in Tharaka Nithi where he was accompanied by National Assembly Speaker Justin Muturi, Gatundu South MP Moses Kuria, Governor Muthomi Njuki and Senator Kithure Kindiki among other leaders.

Ruto also hinted at giving Kindiki a powerful position in his government arguing he made the right decision by asking him not to defend his seat.

“When I came here I told you to let this man go and help me in national politics because he has bygone the post of being a senator or that of a governor,” he explained.

He added, “Kwa ile orodha ya UDA, yule nambari moja ni hustler, nambari ya pili ni Gachagua halafu Kindiki…sasa mtu mwenye atakuwa nambari ya tatu kule national mnataka kumfungia yeye hapa?” he posed. (In our pecking order, I am at the top followed by Gachagua and Kindiki…so why should you people continue someone who is ranked the third here?)

Kithure on his accused President Uhuru Kenyatta of neglecting the region despite voting to the last man for him in the 2013 and 2017 general elections.

Pledging support for Ruto in his quest, the senator said he has always stood with them even after the President failed to ensure all promised projects are accomplished.

He noted, “For five years you have never stepped in Tharaka Nithi, you are not going to get a single vote from this region, We respect you and forgiven you but we shall not forget,”

He added, “I speak with authority, I speak with conviction, and with clarity…there is no way we can allow President Kenyatta who has betrayed us and hate us to impose his project on our people.”

He said it was sad that all the roads that had been launched for construction in the county have all stalled.

Ruto: I wouldn't have issues if Raila's brother was IEBC chair

Ruto said he does not have reservations for any community or ethnicity serving.
News
1 month ago

Ruto: Why I arrived late for IEBC meeting

Ruto said he had already scheduled time for other meetings on the morning hours.
News
1 month ago
WATCH: The latest videos from the Star
by FELIX KIPKEMOI Political Reporter
News
29 June 2022 - 14:51
Read The E-Paper