They were told after elections, some politicians won't even remember them

• Abdalla M of Hope Disability network said that during elections, there are probabilities of more disabilities due to the injuries incurred from the chaos.

• "I, therefore, call upon the youth to maintain peace and stand their ground. They should not allow themselves to be used," he said. 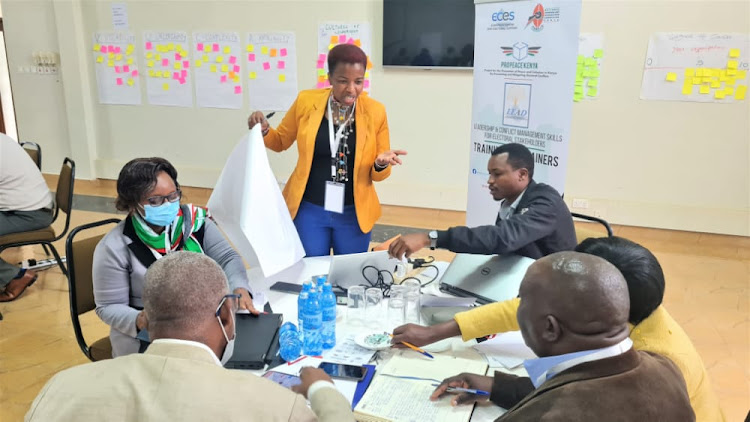 A section of pro-peace youth leaders has called upon the youth to stand firm in their decisions to avoid being swayed by politicians.

The clarion call was made by Jackeline Saleiyan, Founder of A Pack A Month during the National Cohesion and Integration Commission (NCIC) training on Leadership and Conflict Management skills for electoral stakeholders.

“It is not politicians using our youth, it is our youth who have become malleable so much so their decisions and actions take the form which the politicians present. The youth need to be firm and take control of themselves and decisions,” she said.

She added that the youth should not make quick decisions to “sell “ their votes for handouts.

“The youth should know their worth, that they are priceless; their vote is worth peace and peace is worth more than gold. Kenya deserves credible leaders and if indeed the future belongs to us, then we should begin to build it now by making the right decisions," she said.

Abdalla of Hope Disability network said that during elections, there is a probability of more disabilities due to the injuries incurred from the chaos.

"I, therefore, call upon the youth to maintain peace and stand their ground. They should not allow themselves to be used," he said.

“At the end of the day, it is the common mwananchi who directly feels the effect of lack of peace.”

Nicodemus Zakayo, a youth coordinator in Makueni also present in the training reminded the youth that after elections, there is a likelihood the same politician youth fervently campaign for may not even remember them.

"Hence,  vote wisely and peacefully. In as much the economic times are wanting, handouts should not cloud the youth’s judgement," he concluded.

They will also preach peace messages to all the people despite their background, race or tribes.
Counties
3 months ago