•The UN negotiators are in Nairobi to strengthen the Convention on Biological Diversity treaty, through new rules expected to be adopted in Montreal this year.

•“We now have irrefutable evidence,” said Lucy Mulenkei, a Maasai from Kenya and co-chair of the International Indigenous Forum on Biodiversity. 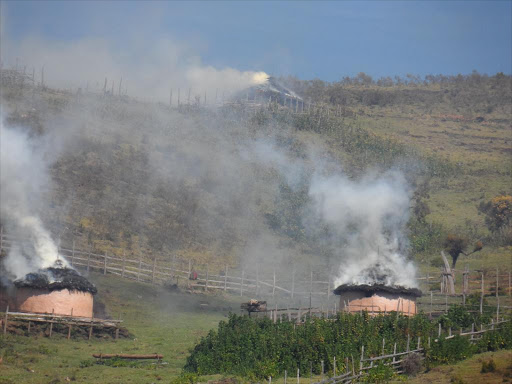 Sengwer houses set on fire by forest officers in Embobut in 2016.
Image: FILE

The six-day United Nations talks that would have given indigenous groups such as the Ogiek and Sengwer rights to live in forests without eviction have ended without a solution.

Some advocates called the  Convention on Biological Diversity talks a "failure at all levels" and CBD boss Elizabeth Mrema admitted there was a need for "additional work."

The CBD is a UN treaty adopted 30 years ago but which needed to be strengthened through tougher text to protect the environment.

The Nairobi meeting, which ended on Sunday, was expected to strengthen the treaty through new rules expected to be adopted in Montreal this year.

However, the delegates failed to agree on most issues, including entrenching in the treaty a demand by indigenous groups not to be evicted from conservation areas if they already live there.

“These efforts are considerable and have produced a text that, with additional work, will be the basis for reaching the 2050 vision of the Convention: a life in harmony with nature,” said Elizabeth Maruma Mrema, CBD executive secretary, in a statement.

Kenya is a party to the treaty and such a text would have radically altered the way it deals with communities such as the Ogiek, Sengwer and the pastoralists in conservation areas in Laikipia.

There is a growing body of evidence showing that when people living in conservation areas are left to run them, the result is better-protected ecosystems and biodiversity than any other conservation model.

“We now have irrefutable evidence,” said Lucy Mulenkei, a Maasai from Kenya and co-chair of the International Indigenous Forum on Biodiversity.

“The only way the UN’s future biodiversity international framework can be a strong and effective approach for conserving biodiversity is by recognising land rights and incorporating and ensuring a strong human rights approach that respects the role of indigenous peoples and local communities,” she said.

The Nature Conservancy, an NGO with offices in Nairobi, said the meeting failed at all levels.

“This process is intended to drive a global, UN-wide roadmap for humanity’s relationship with nature. Currently, this is a failure at all levels," said Linda Krueger, TNC director of biodiversity policy and infrastructure.

The objective of the Nairobi meeting was to reach a consensus on the text of the framework, which is to be finalised at the 15th Conference of the Parties (CoP15) at the CBD in December in Montreal.

An additional meeting has now been proposed just before the CoP15 in Montreal to provide another opportunity for the negotiators to clean the text. However, this is subject to the availability of funds.

"The meeting agreed to develop a path forward that includes the engagement of all regions preparing for talks involving all Parties immediately before the second part COP 15," the CBD secretariat said in a statement.

The indigenous leaders have already made progress in promoting the evidence that supports their demands; the latest version of the text being debated in Nairobi acknowledges the need for a human rights-based approach to conservation and for recognising rights to traditional territories.