• The commission is currently in a catch-22 situation over the matter and has scheduled a meeting with the four presidential candidates to reach a consensus over the matter. 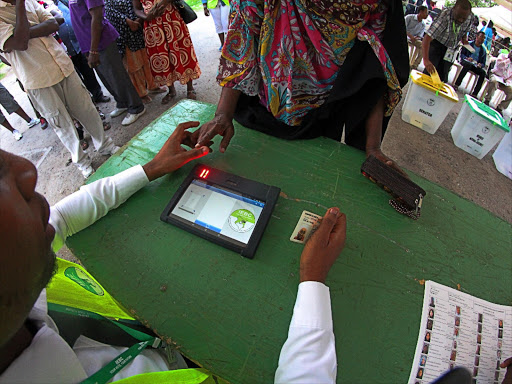 The plan by Independent Electoral and Boundaries Commission (IEBC) to ban manual registers from polling stations during the August polls is an illegal undertaking and goes against a 2017 court ruling that the commission fully supported.

The commission is currently in a catch-22 situation over the matter and has scheduled a meeting with the four presidential candidates to reach a consensus over the matter.

“IEBC should reconsider and bring back manual registers as a backup for voter identification in the event technology and power fail,” Ruto’s head of campaign secretariat Josphat Nanok said.

But as the parties await the meeting, a reference to a Court of Appeal judgment on August 4, 2017, indicts the electoral agency for going against the Election Act should it ban of the manual voter register.

Section 109 of the Elections Act requires IEBC to put in place complementary voter identification mechanisms with the approval of parliament 60 days before the general election.

In the appeal case number No 258 of 2017, the defunct National Super Alliance (NASA) had gone to court seeking orders to overturn a High Court ruling that found that the commission had provided a complimentary voter identification mechanism.

The IEBC, the Attorney General and Jubilee Party had been listed as the first, second and third respondents, respectively.

NASA had argued in its appeal that the High Court in its judgement of July 21, 2017, erred since the IEBC had failed to provide complementary voter identification with less than 40 days to the August 8, 2017 polls.

During the hearing, IEBC demonstrated that it had complied with Section 44A of the Election Act, 2011 and made provision for a manual voter identification mechanism should the electronic system fail.

The Act states that, “the commission shall put in place a complementary mechanism for identification of voters and transmission of elections results that is simple, accurate, verifiable, secure, accountable, and transparent to ensure that the commission complies with the provisions of Article 38 of the Constitution.”

IEBC told court that it had complied with the legal provision by dint of Regulation 69 and 83 of the Elections (general) Regulations 2012.

The regulation states that in case the electronic voter identification device fails to identify a voter, the presiding officer shall identify the voter using the printed register of voters and allow them to vote.

This, the regulation observes, must be done in the presence of party agents and verification form 32A must be fully filled.

To support this argument, IEBC further said it had sufficient technicians on the ground and emergency kits in the event of failures.

The Memo directed the officers to use biometric verification as the primary mode of identifying voters.

“Where a voter cannot be identified using biometrics, then the presiding officer shall use a complementary mechanism of alphanumeric search in the presence of agents and the voter shall fill form 32A before being issued with six ballot papers,” Chiloba said.

He added: “The presiding officer will resort to the use of printed register of voters after approval from the commission upon confirmation that KIEMS kit has completely failed and that there is no possibility of repair or replacement.”

Chebukati invited the four presidential hopefuls to a meeting next Wednesday.
News
5 months ago