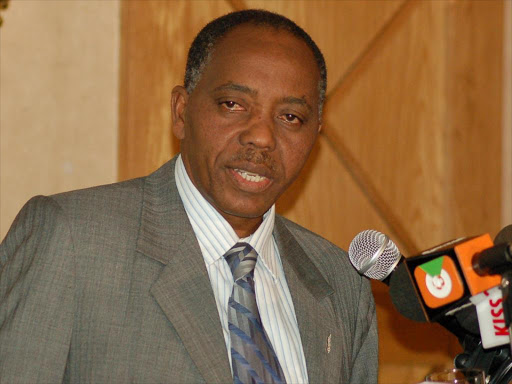 Head of Public Service Joseph Kinyua in a past event
Image: FILE

President Uhuru Kenyatta has asked civil servants not to be tribal when offering services to the public.

The President on Thursday said public servants must not wear ethnic lenses when responding to the needs of Kenyans because they have a right to access services and they pay taxes.

In a speech read on his behalf by Head of Public Service Joseph Kinyua at the close of a three-day public service celebration event in Nairobi, Uhuru said public servants must be loyal and of high integrity.

Its theme was: “Strengthening resilience in nutrition and food security for a healthy nation: Harnessing health and social protection system for acceleration of social and economic development.”

Uhuru said civil servants must be guided by overriding nationalism and patriotism and that their loyalty must be to the nation and not their ethnic groups.

Kinyua gave an example of a case in which an unnamed leader in the public service refused to have a borehole dug for a school because the students in the school were from a different ethnicity.

“It is a very sad case we are dealing with. How can students be denied the water they need just because the person who is supposed to give the authorisation is from a different ethnic community?” he asked.

Uhuru said he is keen to leave a disciplined public service that upholds high ethical standards and whose dedication to nationhood cannot be doubted.

He said the current lot must bequeath the next generation such a service to the good of the nation.

Public Service Cabinet Secretary Margaret Kobia, announced that students will start getting free beefed corn from the Kenya Meat Commission as part of the initiative to improve nutrition in the schools.

She said the discussion of a cabinet memo on the new policy is at an advanced stage to implement the initiative.

The memo is at the desk of Principal Secretary Nelson Marwa for final touches.

She said Kenyatta had issued a directive to her ministry to ensure that better nutrition policies are institutionalised in the public service and the right place to start is at the schools.

“A lot of the feeding programmes available even in schools have too much carbohydrates which is not healthy,” she said.

“A recent study found that feeding programmes that had enough proteins rather than excess carbohydrates tend to make learners more healthy and agile. That is the focus of this policy initiative.”

Kobia said the President’s vision is informed by the fact that most children get retained in school by the feeding programme.

“In many parts of our country, children get motivated to go to school by the food offered. Partnering with the KMC in this arrangement would fetch even better outcome,” she said.

"Crafting the policy would institutionalise additional protein in the feeding programme so that even the coming government picks up from where we will have left.”

Kakamega Governor Wycliffe Oparanya, who also graced the event decried the inadequate support from the government to the counties in managing public servants.

He said the national government has not done enough in helping the counties do capacity building for grassroots servants and this has seen taxpayers miss getting value for money.

“I want to challenge you Head of Public Service that this is an area that requires swift and adequate attention. We have not received enough support in this area,” Oparanya said.

Oparanya also asked the public service top brass to institutionalise performance contracting and have it cascaded to the counties to ensure accountability and better service delivery.

He also complained that the counties inherited a huge cadre of public servants from the defunct local governments and who were managed in a different remunerative system separate from the Salaries Remuneration Commission.