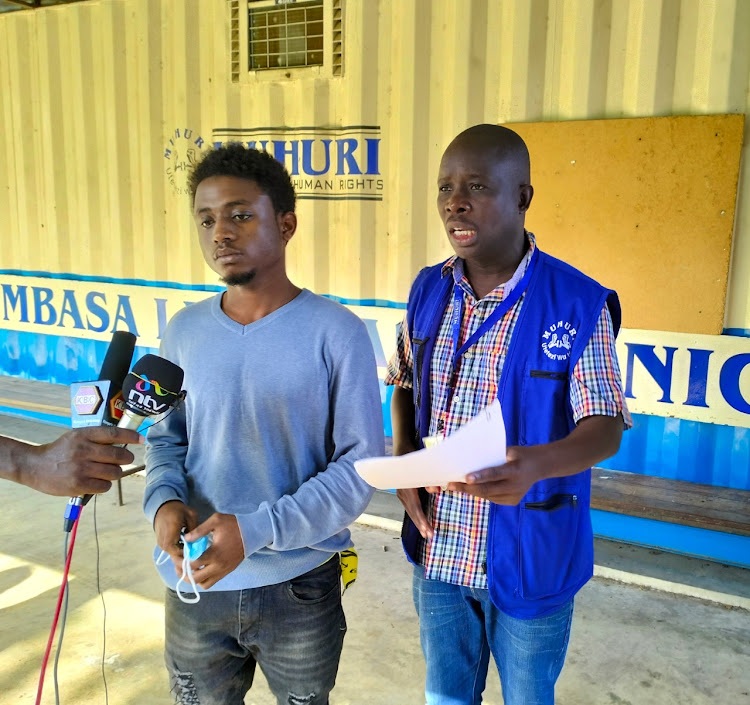 IT WASN'T ME: Imran Mohammed and Francis Auma at Muhuri offices in Mombasa on Wednesday, June 22.
Image: STEVE MOKAYA

A man suspected to be behind the murder of Mohammed Abdulrahman, 22, at Kibokoni, Mombasa, on Saturday has surrendered to police.

Imran Mohammed, 21, surrendered on Wednesday through the Muslims for Human Rights, a non-governmental organisation based at the Coast.

CCTV footage is said to have captured him and others at the scene of the murder.

The suspect, who said he's innocent, accused police of trailing him.

He said on Tuesday night a group of police officers went to his home in Old Town to look for him.

"About 30 police officers were looking for me. I have done nothing wrong. I tried my best to help my friend but I could not, now I'm being blamed," Imran said.

He said he and some friends were seated in the field, together with the deceased, when the incident happened on Saturday.

"I was busy on my phone. I was surprised to see my friend had been stabbed. I stood up and went to help him. At that point, Mohammed, my other friend, stood up and fled the scene," Imran said.

The suspect said after futile attempts to help the stabbed friend, he also walked away and went home. He would later be informed that the injured friend had died.

Imran said he is innocent and those who stabbed the deceased are known by the government because they were captured by the CCTV camera.

"Everything is known. The deceased was my close friend. They stabbed him for no reason. I used to train him in boxing. We've known to each other since we were kids," he said.

The suspect denied being a member of any gang. He said he earns a living from selling fish.

In addition, he has a boxing training group for youths in Mombasa. They meet and train every day at Treasury Square and Makadara grounds in downtown Mombasa.

The suspect also has an active court case.

He said during Eid celebrations, he and two of his friends went to a hotel in Nyali and the owner of the hotel planted pangas on them.

They were arrested and released on cash bail by a Shanzu court.

A rapid response officer at Muhuri, Francis Auma, said the suspect fears for his safety and asked the police to keep him safe.

He also encouraged more suspects to surrender to the police.

"Yesterday I got a distress call from Imran's family. They said their home had been stormed into by plainclothes police officers. My team and I went to the home and truly we found the police there," Auma said.

He said the police told them they were looking for Imran because he is a suspect in the Saturday murder incident.

"We all know how the Coast is. A slight delay and the suspect is killed by the police. We are presenting the suspect to the police and we want the rule of law to be followed to the latter.

"If one has committed a crime, let them be taken to court. We are asking all the suspects in this murder case to present themselves to the police and let the law follow its course," Auma said.

The official also urged Mombasa youth to be vigilant because there are so many active gangs and the situation might worsen as election nears.

He requested the police to be proactive and not just being very active after someone has died.

The main suspect, who was captured by the CCTV video stabbing the deceased, is on the run. The police are looking for him and six others.

Relatives of the deceased called for fast investigations, so that their son can be accorded justice.

The mother of the deceased, Maisha Rufai said her son was innocent.

"We received a call on Saturday at 5 pm with news that our son had been killed.

"He left home after we had taken lunch and said he was going to a barbershop. He had come from the barbershop and went to the field to relax, when he was murdered," she said.

Rufai said her son was jobless, dumb and had a mental problem.

Mombasa Urban subcounty police commander Maxwell Agoro said the Directorate of Criminal Investigations had taken over the investigations, and the public shall be told of the outcome of the probe.

Agoro said the police are in hot pursuit of other suspects.

"On June 18, we received a call that a person had been killed in Kibokoni.

"Our officers rushed there and found that Abdulrahman had been stabbed and was heavily bleeding. They tried to help him but he died," he said.

He said one of the suspects, Haji Chiro, has a pending court case and he was supposed to appear in court on Wednesday, but he did not.

Agoro requested cooperation from the public to end crime in the Coast.

"We are sorry to the family of the deceased and we want them to get justice," he said.

They were charged for allegedly allocating Sh30 million parcel of land.
Counties
1 week ago

Programme aims to train 30 youth in 10 counties to report malpractices.
Counties
3 weeks ago

They however want assurances from the security organs that they will not be victimised and arrested or killed.
Counties
1 month ago
“WATCH: The latest videos from the Star”
by STEVE MOKAYA
News
22 June 2022 - 23:00