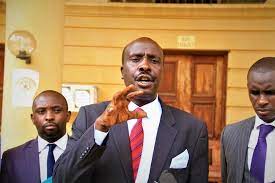 Five police officers charged with the murder of a man suspected to be behind Sh72 million ATM heist will have their bail hearing on July 4.

They are accused of killing Wycliffe Owour on March 24, 2020, in Kayole Junction.

The officers appeared before justice Lillian Mutende of Milimani on Wednesday and denied the charges.

The accused through lawyer Danstan Omari had asked the court to release them on bail pending the hearing and determination of the case.

They also sought to be remanded at a police station instead of the Industrial Area remand or any other remand.

"The accused persons were charged and remanded at Nairobi remand, which poses a threat to their life. The officers have carried out various arrests and any detention with the persons is an endangerment to their life. The people they arrested are seeking vengeance," Omari said.

He said the accused persons seeks to be admitted to bail pending trial, as there are no compelling reasons for their continued detention.

Omar said their release will not in any way affect investigations and prosecution of the case.

He said neither the victims or witnesses have deponed to having been threatened or unduly influenced by the accused, with a view of interfering with investigations or the case.

The officers, he said, have a fixed place of abode.

"The accused persons have a constitutional right to a fair trial, which entails the right to be presumed innocent until proven guilty.

"The detention of an accused person without compelling reasons, is a violation of the aforesaid right," Omari said.

The prosecution however, opposed the application.

Through Inspector George Otieno, the DPP said Ipoa carried out investigations into the circumstances surrounding the fatal shooting of Owuor.

He said the oversight entity established that there is sufficient evidence against the accused persons.

"The authority established that on March 24, 2020, the deceased was arrested, handcuffed and fatally shot in broad daylight, by the suspects days after receiving threats from the police," the prosecution said.

He said the evidence collected during the investigation is compelling to secure a conviction of murder against the accused persons.

The inspector said if found guilty, the punishment meted out could be that of the death penalty.

The court heard that some vulnerable civilian prosecution witnesses in the case are well known to the accused persons.

The prosecution said there is a high likelihood that if released on bond or bail the accused persons will threaten, intimidate, coerce, interfere and try to influence the said witnesses.

"Court has a Constitutional duty to balance the rights of all persons including the victim. It is our humble submission that this court protects the right that was lost under Article 26 of the Constitution, on the right to life.

"This entails providing an enabling environment for the prosecution witnesses to testify without any fear or interference, by declining to grant the accused person bond or bail," the court was told.

However, the prosecution said if the court will be inclined to grant bond to the accused persons, they should be admitted to strict terms.

They said the accused persons should be directed not to be in contact with any of the prosecution witnesses, either directly or through pries.

Justice Mutende will make her ruling on July 4.

The arrests of the officers were effected following recommendations by the Office of the Director of Public Prosecutions, who ordered the probe.

Owour is suspected to have been assassinated by the accused persons.

The DCI said Owuor was gunned down on March 24, 2020, after a fierce shootout with the police.

The victim was alleged to have orchestrated the bank heist, with the aid of rogue police officers.

The detectives said Owour had offered to cooperate with the officers during the arrest.

Police officer to be arraigned over civilian murder — IPOA

Omwacha was allegedly assaulted by the police on  February 19, 2019.
News
1 week ago

The woman had been arrested on accusations of not wearing a face mask on April 12, 2021.
News
2 weeks ago

IPOA commences probe into shooting of Form 4 girl in Nakuru

Whitney Atieno, 19, was shot outside a salon where she had gone to have her hair plaited.
News
2 weeks ago