•Only three voted against the motion with none of the lawmakers abstaining during the afternoon session.

•“These are the results; Abstention is zero, Nays  are three while Ayes are 27, The ‘Ayes’ therefore have it ,”  Senate speaker announced. 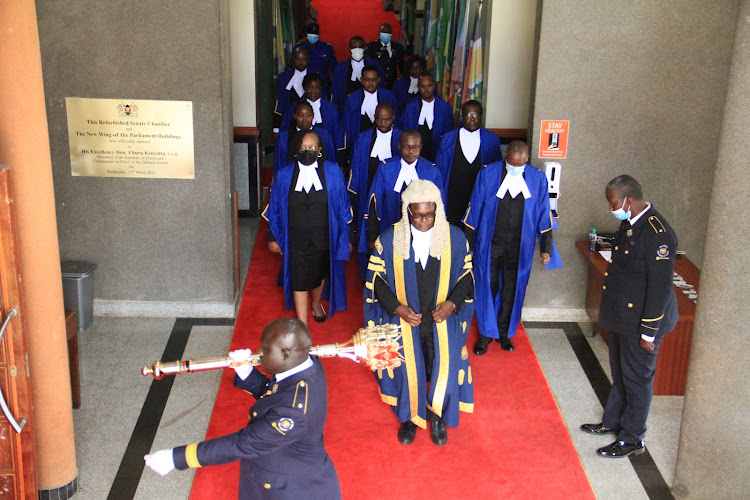 Senators on Tuesday passed a motion on debt ceiling giving the government an enhanced headroom to borrow up to Sh10 trillion.

A record 27 Senators voted to amend the Finance Management Regulations that allows Treasury to borrow extra Sh846 Billion to plug in the budget deficit.

Only three voted against the motion with none of the lawmakers abstaining during the afternoon session.

“These are the results; Abstention is zero, Nays  are three while Ayes are 27, The ‘Ayes’ therefore have it ,”  Senate speaker announced.

The passage was however after several failed attempts to raise requisite quorum to consider the motion on raising the debt ceiling.

The afternoon soon was forced to take break as the house leadership whips members for the crucial motion.

For the motion to sail through, it required at least 24 delegations (elected senators) out of 47 to vote in support.

Last week the House was forced to extend sitting to Tuesday after an attempt to take a vote on a motion seeking to increase the country's debt ceiling was hit by the quorum hitch.

Treasury had proposed to push Kenya's borrowing limit from the current Sh9.1 trillion to Sh10 trillion.

The Senate was expected to vote on Thursday on amendments to section 50(2) of the Public Finance Management Regulations to adjust upwards the debt cap but was moved to this week after quorum hitches.

The current law provides that the country shall not exceed the public debt beyond Sh9 trillion.

Parliament had successfully adjusted the borrowing headroom to Sh9 trillion from Sh6 trillion it was in October 2019.

She argued the next government, whether by Azimio or Kenya Kwanza, they will need a year to settle and discuss increment of debt and other issues.

"Let us save them the burden by ensuring that they have some funding to run the government for the first year. Afterwards, they can make their own decisions," she said.

The DP's allies were however determined to shot down the proposal claiming it was unnecessary burden to taxpayers.

Nominated Senator Isaac Mwaura said, "I oppose this increase of the public debt from Sh9 trillion to Sh10 trillion. How can we borrow the whole of our nominal GDP."

"We need to tell Kenyans that if the debt ceiling rises, the cost of living will go up," Nandi Senator Samson Cherargei said last week.

"The National Treasury has failed. It has not been open to engage the Senate and Parliament on public debt management."

Senate postpones adjournment to next week

Orengo said that the House has several pending businesses.
News
3 months ago
Post a comment
WATCH: The latest videos from the Star
by LUKE AWICH Political Reporter
News
21 June 2022 - 17:50
Read The E-Paper