Wavinya Ndeti: I've 6 degrees, the 7th one was my late husband

Wavinya on Thursday shared a letter showing she studied a degree in 10 months.

•Ndeti said she has several degrees from credible institutions accusing those questioning their authenticity of planning to waste her campaign time.

•She addressed the public during her political rally at Mtituni shopping centre in Machakos County on Wednesday. 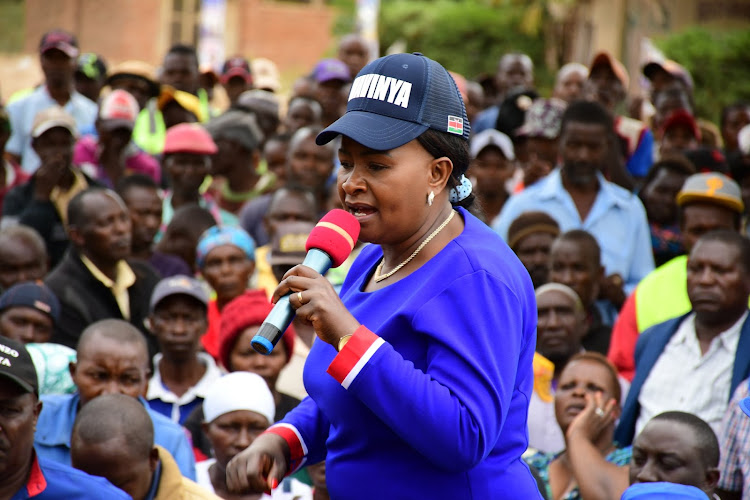 Machakos Wiper party governor candidate Wavinya Ndeti has fired back at critics questioning the validity of her university degree.

Ndeti said she has several degrees from credible institutions accusing those questioning their authenticity of planning to waste her campaign time.

“I have six degrees, the seventh was my deceased husband. Those peddling propaganda that they are fake wants me to waste my time in court. I have no time to waste,” Ndeti said.

She addressed the public during her political rally at Mtituni shopping centre in Machakos County on Wednesday.

The former Transport CAS was responding to claims that the degree certificates she presented to IEBC for clearance to contest for the seat were fake.

Ndeti also trashed the information going viral on social media that London South Bank University had issued a statement stating she didn’t graduate from the university.

“The South Bank University United Kingdom wishes to notify members of the public that Ms Wavinya Ndeti did not graduate from this institution as she alleges. The university earlier issued a statement on the matter and was clear that the person in question did not start or complete her studies in our esteemed institution,” the fake letter from London South Bank University read in part.

Two Machakos voters had lodged a complaint at the electoral commission challenging its decision to clear Ndeti to rally for the gubernatorial seat.

In the complaint, the voters alleged that she doesn’t have a university degree as required by the law.

She shared letter showing she studied the degree from September 1994 to July 1995.
News
1 month ago

Ndeti had laughed off claims by her critics that she would be disqualified on academic grounds.
News
1 month ago
WATCH: The latest videos from the Star
by GEORGE OWITI Correspondent - Machakos
News
16 June 2022 - 16:45